The Instagram video that broke me featured a pretty blonde in a pink crop top. She was caressing her stomach and smiling blandly while swaying in front of the camera. “Life’s too short not to love every inch of yourself!” the caption read.

I don’t know why, but that video did it. I’d seen those types of videos before, with a woman half-dancing around, urging me to embrace my soft curves or love my cellulite or whatever. But this one was the last straw. Believe me when I say I threw my phone down on the couch and took an angry lap around my living room. That moment was when I realized that the body positivity movement—the love every inch movement—was just too far out of reach for me.

Surely there had to be something in between loving myself unconditionally, and how I currently felt, which ranged from benign hostility toward my body, to “meh.” Enter: body neutrality. Instead of the constant stream of negative thoughts that runs through my mind 24/7 (just me?) I want…nothing. I don’t need to replace all those messages with body positive self love—I just want a break from the negative.

The author at a foggy Grand Canyon. By this point it should be obvious that I’m not sure what to do with my hands in photos.

It’s not that I haven’t tried to be positive. I talk to my therapist. I try to practice intuitive eating. I switched up my Instagram follows so my feed is full of people of all sizes revelling in their gorgeous bodies. But it turns out those Instagram videos aren’t helping. Instead, they’re a reminder of yet another way I’m failing my body. Now, not only am I worried that I’m the wrong size and shape, I also feel badly about not loving myself enough just the way I am. 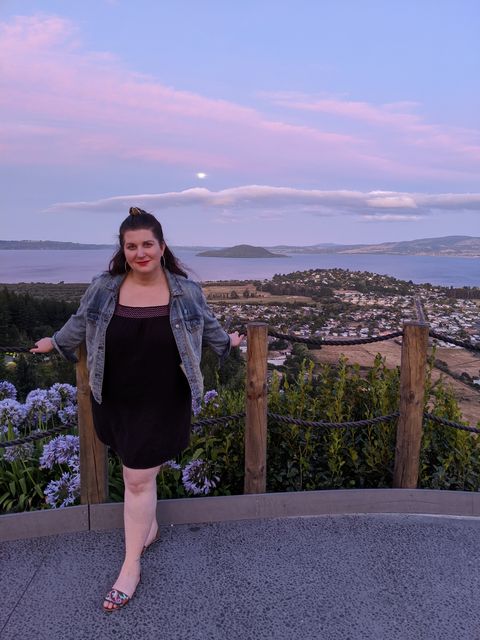 In this picture, I was trying to remember how celebrities pose with one leg behind the other to make my legs look slimmer.

It would be nice to love my body. Think of the brain space that I could free up! The hours I could devote to reading, cooking, or using my scrolling-through-Instagram time to focus on celebrities on yachts or judging their fancy kitchens (two of my favorite types of posts). But despite how much I would love to follow my patron saint, Lizzo, to the altar of body positivity, it’s just not happening.

So, before I can truly love my body, I just want to turn down the volume on all the messages that are blaring inside my head. I needed to start by cutting the background noise. For help, I turned to Jessi Kneeland, a body image coach. According to Kneeland, body neutrality is actually kinda boring. “Neutrality is just the truth. You look in the mirror and go, ‘This is a body,’” Kneeland says. So I don’t have to revel in my shape and adore every pimple? As it turns out, nope!

“We’ve all been taught that it’s super important that we have an opinion on how we look. One of the first tenets of neutrality is maybe that’s not true,” Kneeland says. “But that’s a pretty rebellious stance to take in a culture that, especially for women, is constantly reinforcing the idea that how we look is not only one of the most interesting and valuable things about us, but also that it’s a way in which we’re constantly failing, and we should constantly be trying to improve.”

The good (and bad) news is that I’m certainly not alone. Kneeland has worked with hundreds of clients trying to break through the fog of mixed-messages about their bodies. Originally she focused on helping clients via self love and body positivity. But she noticed for many of her clients, the messages weren’t clicking. “Positivity is just one more unrealistic standard to reach,” she says. “And I think it makes people feel worse; it makes them harder on themselves and beat themselves up more, which is exactly the opposite of what we’re going for.”

Ah yes, the old “I’m not loving myself enough” blues. I’ve sung that song a few (hundred) times before. But I want to be done with that, I really do. And so I asked Dr. Elizabeth Wassenaar, a psychiatrist, and the medical director at the Eating Recovery Center in Denver, for advice on how to start working towards body neutrality. “The first thing is to allow yourself to be open to the idea that your relationship with your body could be different than it is,” Wassenaar says, which is exactly the kind of low-stakes starting point I was hoping for.

Or at least, it seemed low stakes until I implemented Wassenaar’s other piece of advice, which is to recognize all the negative things I say about myself internally. The first time I tried to list them, I lost count of all the mean thoughts swirling around my brain. I hated my thighs for fusing together, causing painful chafing. I hated my rosacea for making my face flush when it seemed like everyone and their sister was posting no-makeup selfies. I could barely walk past a mirror without cringing at my rounded cheeks and jaw in profile. I didn’t even realize the full weight of the emotional burden I’d been carrying around each day, and it shocked me. But Wassenaar says it’s normal to feel overwhelmed.

“It’s okay to have a feeling or a thought about your body that isn’t positive,” Wassenaar says. “And that doesn’t change the fact that you can have goals for your body to help you live your life.” The goals should not be about appearance, Wassenaar says; instead, focus on function—a cornerstone of body neutrality. Like, for example, taking a minute to acknowledge that my legs and lungs worked together to carry me up a steep hill. “Messages of appreciation and gratitude for your body, these neutral messages, can start to reframe your experience of being in your body,” she adds. 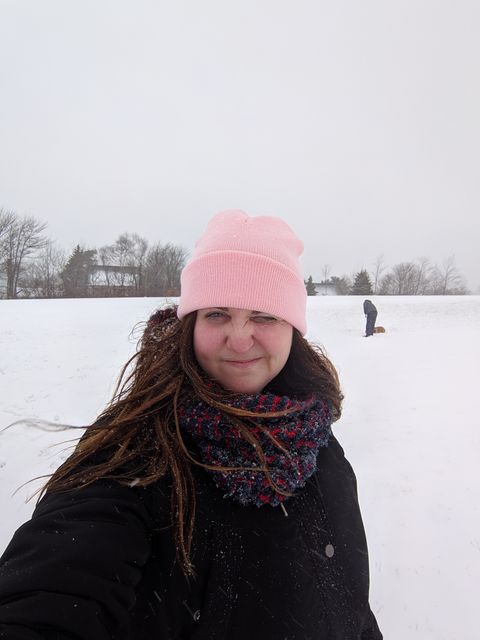 A winter selfie, with my rosacea poking through.

So that’s what I’m starting with. Now, when I look in the mirror, I don’t try to force any positive messages, and I definitely don’t caress my tummy with a vacant grin. I just think, that’s a stomach. As much as any single stomach can exist in the world, well, mine does. Is this where I’d like to eventually end up? No. One day I hope I can truly love every inch. Until then, I just want to look at celebrities on yachts in peace.

Selena Gomez and Coldplay’s ‘Let Somebody Go’ Has Brutal Lyrics About Heartbreak
Exclusive: Precious Lee, Meadow Walker, and More Model for Zara’s New Studio Collection
Coach’s New Collab with Jennifer Lopez Is “Wearable, and a Little Bit Glamorous”
Watch: ‘Latinos in the Media’ Livestream in Honor of Hispanic Heritage Month
How to Have a Hot Girl Fall, According to Haim