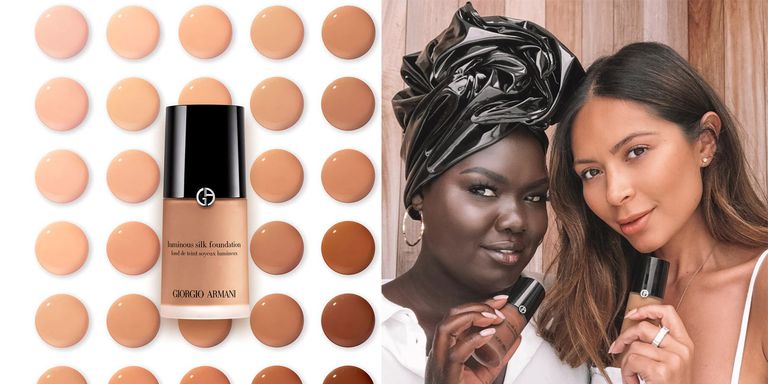 There are a few beauty products that have stood the test of time and grown a cult following—and without a doubt, Giorgio Armani’s Luminous Silk foundation is one. Launched back in 2000, it’s widely lauded as one of the best formulas by makeup artists and celebrities alike (its famous fans include Meghan Markle, Kim Kardashian, and Cate Blanchett), and in nearly two decades, the foundation has become a gold standard for the way it covers up as much or as little as you like, with a dewy, lit-from-within finish. Now, even more people will be able to join the bandwagon with news that the brand is extending the shade range of this bestseller.

There are six new colorways added to the existing offering, bringing the shade total up to a respectable 31. The new shades are notably all in the medium to deep category, and even deeper than the foundation went before with shade #15. #15 is a match for beauty vlogger Nyma Tang, who has become an authority on makeup for deeper skintones thanks to her YouTube series called “The Darkest Shade” in which she tests out different brands’ concealers and foundations on her skin.

The extensions came about after feedback from Armani store customers in the U.S., who were buying multiple shades to match their skin—and couldn’t afford two of the $64 bottles. “With everything going on now about being inclusive, we never really had very dark shades,” Giorgio Armani International Makeup Artist Linda Cantello told ELLE.com. “Now looking into darker shades made them understand the complexity of skin tones. It’s not just, ‘Well, we’ll throw a couple dark shades in.’ Especially when you have dark skin, not one shade is going to suit every dark complexion.”

At a time of the “Fenty 40,” when brands left and right are clamoring to launch new foundation ranges with just as many offerings as Rihanna’s industry-shaking Fenty Beauty debut, it’s encouraging to see a legacy makeup counter mainstay keeping up. It’s even more impressive that this development wasn’t actually meant to be A Big Thing, as Cantello told us. “We’re not trying to be Fenty,” she said, commenting on how companies across the beauty industry are all copying the 40-shades movement (and not always hitting the mark, according to makeup enthusiasts). “I think it’s a marketing ploy I’m going to be honest. It annoys me. So we’ve launched with [these shade extensions]. But don’t try and claim it for something,” she said.

Cantello seems to suggest that brands selling a diverse shade range—or if they don’t, making it happen—should be the standard, not the exception. Armani is the latest beauty brand by a major fashion house to take action given the current inclusivity push in the beauty industry. Aside from Dior, which recently launched a 40-shade line this summer, other prestige beauty lines have been slow to produce more offerings. It’s not surprising, considering how overwhelmingly white the high fashion industry has been—case in point: 2017 was the first time every runway at New York Fashion Week had a model of color. Let’s hope these other fashion houses are taking notes.

See and shop the new foundation shades, below.