Nazanin Mandi was 15 years old when she auditioned for American Idol. A talented teenager who loved to sing and act, she still remembers the ad for the now-famous TV show flashing on the television in her suburban California home as she and her mother watched Fox Eleven News.

“My mom was like, ‘You should go do this,’” Mandi remembers. “But you had to be between 16 and 25 years old, and I was 15 at the time. She said to me, ‘Let’s see how far you get. I started making every round. I just kept going and going and going. And right when we got to the top 35 out of thousands of people, they did a background check and discovered I was 15. They kicked me right off the show.”

The incident derailed Mandi’s nascent career—and, for a while, her dreams. “At that age, it’s like the world is going to end, you think that’s your only chance,” she says. “When in reality, your life hasn’t truly begun.”

Today, Mandi is a full-time actress and model who was named a brand ambassador for Rihanna’s acclaimed lingerie line Savage X Fenty in July. In 2019, she released her first single, “Forever Mood,” an R&B single about staying empowered in true love that was executive-produced by her Grammy-winning husband Miguel. And in August, she starred in the independent film The Last Conception as an Indian-American scientist coming out as a lesbian to her parents. 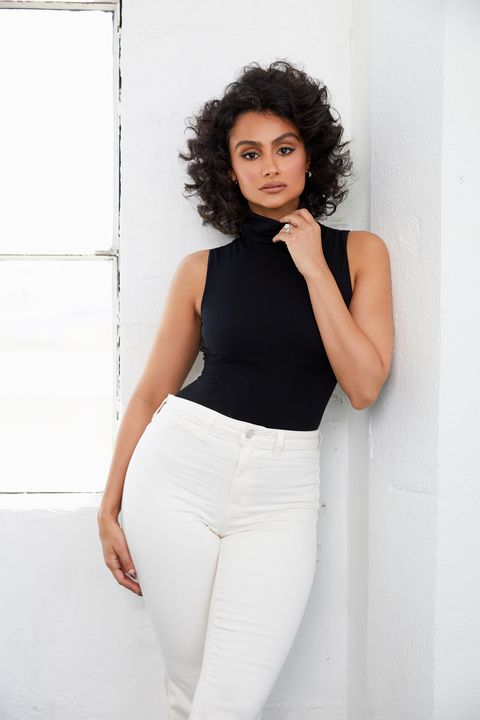 Success didn’t come easy to the 34-year-old actress. While Nazanin knew she wanted to be a performer since childhood, she’s not from a showbiz background; Mandi’s father is Iranian and her mother is Mexican, and growing up in Valencia, a mostly white town of less than a 100,000 people, Mandi felt like she “stuck out like a sore thumb.”

“I’d go to school and not see anybody who looked like me, or anybody I could relate or talk to about things that have culturally impacted me or my family, or something I’m going through,” she says. “I always felt alone. I was like, I need to get out of here. I need diversity. I need to feel like I belong.”

At 18 she moved to Los Angeles, but the freedom of escaping Valencia was overshadowed by a life-changing event: the divorce of her parents after 23 years of marriage. “It was like starting a completely new life in every aspect,” she recalls. Though things were amicable, Mandi, who remains family-oriented (her cousin is her makeup artist), was shocked. “I don’t think I’ll ever get over my parents divorcing.”

As she came to terms with her parents’ decision, Mandi began building a life in L.A., balancing her day job with modeling and auditions. Casting calls were few and far in between, and she worked in retail for seven years, selling clothes at a boutique on Sunset Boulevard to rich customers she now works with or sees at parties. “I’m a very driven woman,” she says. “I knew in order to drive a car to castings, I had to pay for it. When you want something bad enough, you make it happen.”

And yet, even with her work ethic, Mandi faced barriers in the industry based on her mixed-race background and distinct looks. “It’s hard to cast me as a lead because it’s hard to find a full family that looks like it could be my family,” she says. “I would always get the girlfriend or the best friend. I used to feel defeated walking into a casting room because the actors already auditioning looked nothing like me.”

Even as she landed dream photoshoots and casting calls, Mandi fell into a deep depression that lasted through most of her 20s. The misery was compounded by a reliance on diet pills and a lack of confidence in her body. She felt she wasn’t skinny enough, even as her weight dropped to a staggering 102 pounds.

“I knew the potential in me, and that I couldn’t do it alone.”

“When I was about eleven, somebody very close to me told me I was gaining weight,” Mandi said. “I was 24 years old when I got on diet pills. If I didn’t take them, I’d have panic attacks.”

Knowing she couldn’t face her fears alone, Mandi decided to ask for help and committed to investing in her mental and physical health before she turned 30. “I knew I had to get my life together,” she says. “I knew the potential in me, and that I couldn’t do it alone.” It took therapy and a commitment to working through her issues to get off the diet pills and become a healthier, stronger person.

Embracing her natural beauty also led to healing. “We go on Instagram and scroll and see these beautiful women who don’t look like us. But it’s important to put those thoughts in check and embrace your uniqueness and showcase that,” she says. 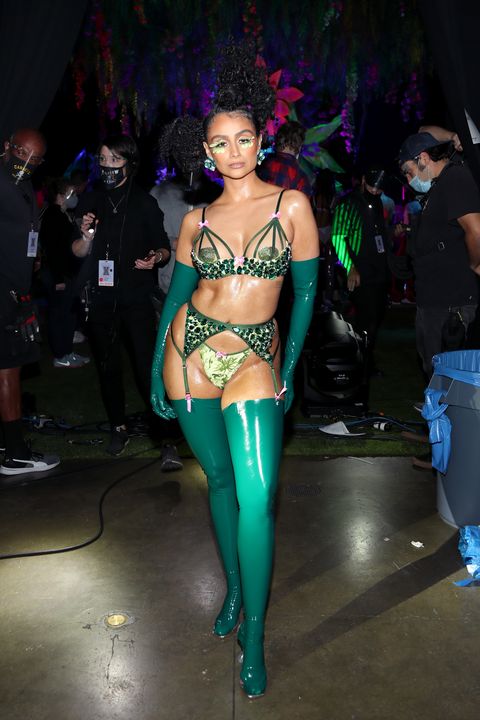 Mandi found a source of support in Miguel, whom she married in 2018 after dating more than ten years. “Going from nothing to where we are now, it’s a [commitment] night and day, and through the journey, we’ve supported each other,” she says. The power couple has influenced each other’s creative pursuits as well: Mandi inspired Miguel’s Grammy-winning song “Adorn,” and recently, the two appeared in the Savage X Fenty fashion show. Mandi, clad in a glittery green bra and leather thigh-high boots, saunters up to her husband and dances with him as he sings on the mic.

Today, Mandi counts over a million followers on Instagram and is a brand ambassador for the feminine label Missguided. She also co-hosts a podcast with her cousin, Nadia Moham, called Ladies Like Us, and became certified as a life coach in February. “I want people from all walks of life and from any age, who, when they look at me, can say if she can do it, then I can do it too,” she says. “That’s my dream.”

The future glows brightly for Nazanin Mandi. She teased she has “something really special” coming up with Savage X Fenty, which she can’t yet disclose, and in 2021 she’ll start filming a TV show with BET. Even as she stakes out her own success, Mandi still finds it important to help other women achieve their dreams and plans to start a life-coaching company. Progress has been delayed because of the pandemic, but Mandi hopes to host her first webinar soon.

“We really can do anything if we put our minds to it, and as women, we know how to multitask. We run families, we have relationships, we pursue full-on careers,” she says. “[As entertainers], I feel that’s the reason why we do it, the purpose is to inspire and bring people hope. And when I can see other women I’ve helped thrive in any way, I will know my ultimate purpose has been fulfilled.”

Liya Kebede Continues Lemlem’s Sustainability Mission With H&M
How We Can Start Fixing Our Brains After Living Through the Trauma of COVID-19
All About Lily James’s New Limited Series, <i>Pam and Tommy</i>
These Celebrities Want You to Give Your Mom a Big Kiss This Mother’s Day
28 Commoners Who Married Royals