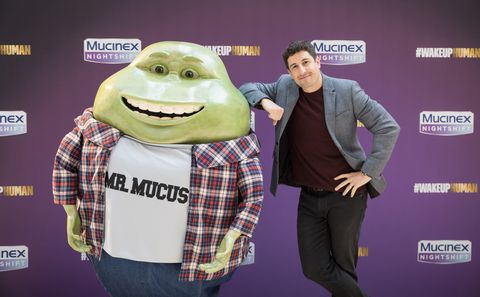 Okay, here’s what I know: Today Jason Biggs, erstwhile star of Orange Is the New Black and person whose performance in American Pie erected a baker’s rack of conflicting emotions in my high school psyche, made a public appearance at the Oculus with acclaimed television star Mr. Mucus to “celebrate the launch of Mucinex Nightshift.” Reading the word “celebrate” in relation to a mucus-related event initially gave me pause, but as someone who has had more sinus infections than anyone else on Earth (look it up; it’s a world record), I do believe that festivities are in order. So. That’s what I know.

What I don’t know, from looking at these photos, is the following:

Welcome to your nightmare!