At one point in The Umbrella Academy season 2, Diego manages to sneak into The Infinite Switchboard, a mysterious screen-filled room at The Commission’s headquarters that allows agents to step out of time and monitor every single point in the space-time continuum. In other words, it offers an overview of the show’s entire twisty-turny timeline. If you found yourself wishing you had your own Infinite Switchboard on hand as you binged the season, you’re not alone. Below, we’ve got the next best thing—an exhaustive guide to the increasingly complicated timeline of The Umbrella Academy season 2, which finds our reluctant heroes scattered throughout the early 1960s as Number Five (Aidan Gallagher) tries frantically to reunite them all in order to prevent yet another apocalypse.

At an unspecified date during this year, Klaus (Robert Sheehan) and Ben (Justin H. Min) crash-land in an alleyway in Dallas, Texas, after Number Five whisks all the siblings back in time just seconds before the apocalypse strikes in 2019. Although Five clearly intended for all the siblings to land at the same point in time, he has a track record of less-than-perfect time travel efforts, so it’s not really a surprise that most members of the Hargreeves crew end up separated by several years.

Klaus becomes the leader of a cult named “Destiny’s Children,” because of course he does, and throughout the next three years he and his harem galavant through Baja, Mexico; Varanasi, India; and San Francisco.

Alison (Emmy Raver-Lampman) lands in the alleyway a year after Klaus and Ben, and is immediately harassed by a group of racist men who chase her through the streets. She finds safe haven at a Black-owned beauty salon, where she eventually takes a job—and meets her future husband, civil rights activist Raymond Chestnut (Yusuf Gatewood).

Luther (Tom Hopper) lands in the alley sometime in the year 1962, and spends a few sad hours plaintively calling for his lost siblings before accepting that he’s all alone yet again. Having already spent way too many years isolated on the moon, he doesn’t take this well, and ends up spending much of his time punching the pain away at an underground fight ring, working for nightclub owner Jack Ruby (John Kapelos).

Elsewhere in the same year, the siblings’ future father, Sir Reginald Hargreeves (Colm Feore), is conducting experiments on Pogo the chimpanzee, helped by a colleague named Grace (Jordan Claire Robbins), who will eventually be used as the model for the robot mother Hargreeves creates to raise his children in the future. 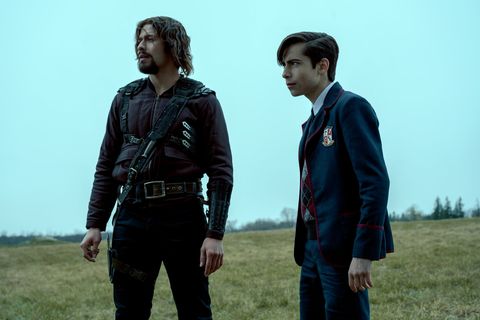 Diego (David Castañeda) arrives from the future, and hits the alleyway just in time to see footage from JFK’s famous “Ask not what your country can do for you—ask what you can do for your country” inaugural address in a TV storefront. Realizing that the president’s assassination is just a couple months away, Diego becomes hellbent on changing history and saving JFK.

At some point around this same time, Klaus grows weary of the cult leader lifestyle and skips out on his followers, returning to Dallas in time to join up with the rest of the family—and try to reunite with his long-lost soldier love, Dave (Cody Ray Thompson).

It’s Vanya’s (Ellen Page) turn to crash land. She’s fresh off a villainous turn in which she lost control of her faculties and transformed into the super-powered agent of destruction known as The White Violin, so she’s a little disoriented. So much so that she staggers right out of the alley and gets hit by a car driven by a young housewife named Sissy (Marin Ireland). Vanya has complete amnesia and ends up moving in with Sissy and her son Harlan (Justin Paul Kelly) and falls in love with her.

After Five witnesses a nuclear holocaust on November 25, reformed assassin Hazel (Cameron Britton) shows up just in time to save him from the blast that destroys everything else on earth. Hazel brings Five back ten days into the past, to November 15, giving him plenty of time to “restore the timeline,” correct whatever mistake has led to the apocalypse, and save the world.

Five catches up with Diego, who’s imprisoned on a psych ward after being arrested outside Lee Harvey Oswald’s house, and finds Luther at the underground fight club. Both of his brothers are deeply uninterested in helping him save the world.

The main action of season 2 takes place over a two-week period beginning on this date. This includes the siblings’ dinner with Sir Reginald, where they try to get his help with preventing the apocalypse and returning home, as well as uncover his involvement in the plan to assassinate JFK. 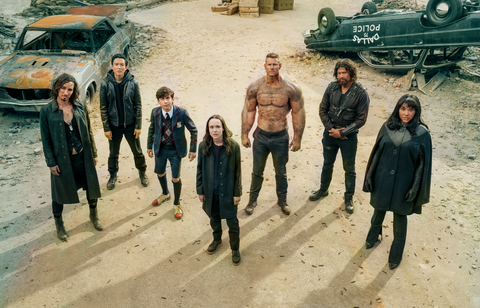 Diego, having been removed from the 1963 timeline and taken to The Commission, breaks into the Infinite Switchboard to watch the day of JFK’s assassination, still hoping to change history. But surprise—on the switchboard, he sees the day has already been changed, because moments before Kennedy is supposed to die, the Dallas FBI building explodes. This prompts Kennedy’s motorcade to drive away immediately with the president safely inside. The Soviets are blamed for the attack on the FBI building (which actually turns out to be Vanya in another moment of uncontrollable rage, natch), and the resulting conflict is what causes the nuclear holocaust.

Diego goes to his siblings to get help in preventing Vanya’s explosion, and Ben, having discovered a new power, is able to get through to Vanya in a way their other siblings failed to last season. His compassion is enough to stop her from losing control and destroying the FBI building. The downside to this touching moment of victory is that it corrects the timeline, so JFK is still assassinated despite Diego’s best efforts to intervene.

Had the timeline not been corrected, this is the day the world would have ended. Number Five crash-lands in the past on this date, in the same alleyway as the rest of his family—only instead of a sedate street full of diners and small stores, it’s a war zone. Soviet soldiers have invaded and are tearing the city apart, but the Hargreeves siblings’ combined powers are more than a match for them. Just as things are starting to look hopeful, though, a nuclear missile strike wipes out the entire gang, save for Number Five, who’s transported away by Hazel. 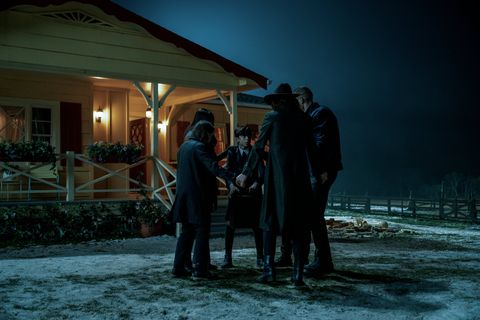 Although this date isn’t actually depicted in season 2, it’s significant because it’s the day that Dave, Klaus’s military lover, is supposed to die in Vietnam. Back in the early ’60s, Klaus brings up the date as he’s trying to persuade a confused Dave not to enlist. But as is always the case with time paradoxes, Klaus’s plan backfires and Dave ends up enlisting even earlier than he’d planned thanks to Klaus’s intervention. Could this timeline change be enough to alter Dave’s fate?

Number Five briefly travels to Wisconsin in 1982 to kill the entirety of The Commission’s board at the behest of The Handler (Kate Walsh). In exchange, he gets a powerful briefcase which will enable him to transport himself and his siblings back to 2019. Five rationalizes this brutal series of executions by claiming that if he doesn’t get hold of the briefcase, he and his siblings will never get back to the present day and the world will end.

On an assignment in London, Five kills Lila’s (Ritu Arya) parents, and The Handler adopts Lila and raises her to be an assassin. Lila is later revealed to be one of the 43 super-powered children born on October 1, 1989.

After saving the world in the past, the Hargreeves siblings tear themselves away from their respective 1960s love interests and are transported back into the future. They land on April 2, the day after the apocalypse caused by Vanya at the very end of season 1. The gang are briefly overjoyed to discover that the world is still intact, but quickly notice that something isn’t quite right. By messing around with their own history—and specifically meeting their own father during the 1960s—they’ve created an entirely new timeline in which they’re possibly not supposed to exist, having been replaced by The Sparrow Academy.

Blake Lively and Ryan Reynolds Shared a Rare Look at Their Summer Date Style While Trolling Each Other
‘Madly in Love’ Jennifer Lopez and Ben Affleck Were Photographed Making Out at a Restaurant
Why Is Sex Always About His Pleasure?
Yes, You Can Protest Without Marching
Eating Disorder Coaching Is Revolutionizing Treatment and Recovery