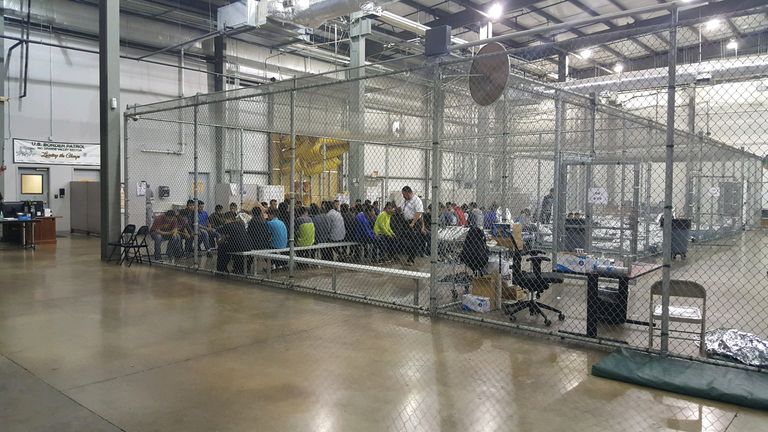 Is there anything more indicative of the American moment and perhaps America as a whole, than looking at a cage holding people and declaring, “this is not a cage”?

This just in from @davidbegnaud: Border Patrol has reached out to @cbsthismorning and said they are “very uncomfortable” with the use of the word cages. They say it’s not inaccurate and added that they may be cages but people are not being treated like animals. pic.twitter.com/0zSDqJszgK

The United States of America has forcibly separated and jailed 1,995 children as their parents sought to cross the border in the U.S. over the last six weeks. This is dramatic uptick in separations, pushing the total number of children being held by the Office of Refugee Resettlement over 11,000 nationwide. While many of the detention centers are being pushed to capacity and, over the weekend, refused journalists and congressional representatives who sought access, members of the administration maintained that the children were not imprisoned, despite prison-like conditions and, in some cases, cages.

Starting to get some handout photos from our tour with @HHSGov.

Here’s the Trump mural I mentioned to @chrislhayes inside the shelter for incarcerated child migrants.

Also their beds and the towels they shower with. pic.twitter.com/EPEQ1VGAAF

Welcome to America in 2018: where cages are not cages unless we say they are.

The action is the result of a “zero tolerance policy” for immigration and a centuries-long American custom of kidnapping and terrorizing children and families to reinforce state-sanctioned oppression. It may seem hyperbolic to draw a line from black and African children wrenched from their parents’ grasp and sold into slavery to the 100 years of compulsory education at distant schools Navajo children endured to the internment of 120,000 Japanese people during World War II and end it at the current detainment crisis, but there are children sleeping under silver foil blankets on the floor of an old Walmart; hyperbole could not compete with the atrocity of reality.

In response to mounting outrage over the practice, the Trump administration gave a variety of obfuscating justifications for a policy that Jeff Sessions plainly outlined on May 7, stating, “if you are smuggling a child then we will prosecute you, and that child will be separated from you as required by law.” Seemingly unaware of anything that happened before yesterday, members of the administration offered the following responses when asked about the detained children:

Donald Trump: The Democrats are doing it. The children are being held in Hillary’s basement next to her server.

Jeff Sessions: Jesus said to do this.

Setting aside the fact that there is no one on Earth who thinks Jesus Christ or any person named Jesus is in any way okay with children being imprisoned as a means of exerting influence on their parents, what’s unsurprising for this administration but nonetheless maddening is the resolute lack of clear communication and good-faith governance. A sibling to the president’s open contempt of the news media, this sinister refusal to engage with the truth is one of this administration’s most damaging tools.

That practice extended, in a dark farcical turn, to the meaning of words this morning as the term “cages” was deconstructed and bandied about.

Officials at the Border Patrol expressed that they were “very uncomfortable” with members of the media using the term. I’m not sure who they think cares about what words they’re comfortable with, but noted.

Doing Border Patrol one better, over on State TV ‘s Fox & Friends Steve Doocy defied physics by lowering the bar while simultaneously dying on a hill when he asserted that the cages we were seeing were not actually cages.

Video released by US Customs and Border Protection from inside a Texas immigration facility shows children and adults held in cages pic.twitter.com/mViEQBmcnh

In America this is not a cage, it’s an opportunity. We should just make that our slogan. Put it on the money.

America: where it’s not a cage, it’s an immersive theater experience you’re compelled to endure.

The true cage is in your mind.

This is not a cage; it’s a house waiting for a makeover show to arrive.

There’s no cages here; cages are at zoos and zoos charge admission whereas we are being very resistant to letting anyone in here. Also, there is no gift shop.

This is not a cage; this is a pervasive campaign of xenophobia disguised as national security manifested in physical form. If it were not chainlink, it would be something else. It’s all real. It’s all happening. It’s all always been us.

Free the Nippleless! From Ourselves and the Shame of Living in a Society That Rarely Acknowledges Us
Susie Lau Celebrates What It Means To Be a Girl
<i>Ahsoka</i>: Everything We Know About the New <i>Star Wars</i> Series
Everything I’m Trying On Via Amazon This Month
<i>Succession</i> Season 4: Everything We Know So Far