Kendall Jenner has long been the most private of the Kardashian-Jenners about her love life, opting to keep her relationships as out of the limelight and off social media as possible. But boyfriend Devin Booker appears to be the exception to Jenner’s rule. On Valentine’s Day, Jenner, 25, went Instagram official with the 24-year-old Phoenix Suns NBA player, sharing a photo of the two together to her Instagram Story. Not even a week later, Jenner was photographed watching his game from the stands. The gestures come practically one year after the two first sparked romantic rumors.

Here’s everything you need to know about Booker, including his athletic career, history with Jenner, and previous connection to Jordyn Woods.

He’s a shooting guard for the Phoenix Suns.

Born in Grand Rapids, Michigan, Booker is the son of Melvin, who was named the 1994 Big Eight Conference Player of the Year during his time at the University of Missouri. In a father-son profile for The Undefeated, Melvin said that NBA “draft night was one of the worst nights ever” after he wasn’t selected for a team. But Melvin instilled a love of the sport in Devin, who was drafted 13th in the first round for the Phoenix Suns. After playing at the University of Kentucky, Booker has averaged 26.6 points per game in his fourth season as a player. He has more time to spend in Los Angeles now, as his team was eliminated from the playoffs last week in a tiebreaker game with the Memphis Grizzlies.

He was set to participate in the 2020 Olympics before they were cancelled.

Another career highlight for Booker has been postponed indefinitely. It was reported in February that he was a finalist to join the roster of Team USA’s basketball lineup for the 2020 Tokyo Olympics. Previously, Booker had participated in USA basketball training camps without making the final roster. Originally scheduled to take place from July 24 through August 9, 2020 in Tokyo, the Olympics have been more or less cancelled due to the coronavirus pandemic. At the latest, they will be held in summer 2021.

He and Kendall were first spotted on vacation togethee in April 2020—controversially because of California’s non-essential travel ban due to COVID-19.

Prior to their latest ‘gram exchange, Booker and Jenner have had a few public outings. In April, the pair was photographed on a road trip from Los Angeles to Arizona, and the following month, they were seen driving near Van Nuys Airport in L.A. Around that time, an insider told People that the two were strictly platonic—for now. “She and Devin have a lot of mutual friends,” the source said. “They’re just friends for now but you never know with Kendall.” Meanwhile, an Us Weekly source said in June, “They’re hooking up, but they’re not serious She’s talking to a couple different guys. She has so many men after her it’s crazy.” In August, the pair dined without masks at Nobu alongside sister Kylie Jenner, according to People.

While rumors swirled about Booker and Jenner, the model received criticism about her pattern of dating NBA players. Someone tweeted a TikTok video of three men tossing a toddler around in a circle, writing, “NBA players passing around Kendall Jenner.” She clapped back, writing in return, “they act like i’m not in full control of where i throw this cooch.”

Jenner was most recently linked to Philadelphia 76ers guard Ben Simmons, although it was reported in February that the pair was “not officially back together.” Prior to that relationship, Jenner dated Detroit Pistons player Blake Griffin in 2017.

Jenner and Booker were first reported to be dating in July 2020.

A source told Us Weekly in July that sure, the two are together, but it’s not serious. “Kendall and Devin are seeing each other, but aren’t serious and are just having fun with each other,” the source said. “It’s easy because they get along well and he also gets along great with her family.”

The two were later photographed showing PDA on the beach and out shopping together in August.

The pair made headlines on Tuesday, August 11 when Booker commented on one of Jenner’s posts. She shared a close-up video of herself posing for the camera, captioned with a single strawberry emoji. Booker simply commented, “I like strawberries,” to which Jenner responded right back with four strawberry emojis. 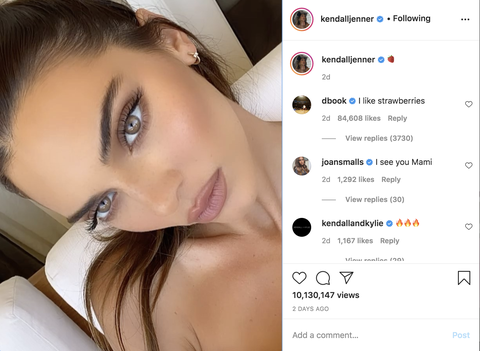 By February 2021, Jenner and Booker were still together—but without “any huge expectations” for their relationship.

Jenner and Booker were able to keep their relationship out of the tabloids for most of the fall. But ahead of Valentine’s Day 2021, a source gave Entertainment Tonight an update on how things were going between them. Booker and Jenner were “still dating and it works because they keep it simple,” a source explained then. “There aren’t any huge expectations or crazy commitments on either side. They have gotten a lot closer, but Kendall’s schedule is particularly super busy and Devin is very understanding of that.”

The source added that Jenner “is also very much her own individual and likes her off time with family and friends and having her space.”

Jenner made her relationship with Booker Instagram official on Valentine’s Day 2021.

In a very rare move for the model, Jenner shared the first photo of her and Booker together to her Instagram Story. She captioned it with a simple white heart emoji:

He loves to travel.

While the status of their relationship is unclear, Booker and Jenner do have one thing in common: their love of traveling, even during the coronavirus pandemic. Jenner has been known to flout mask or social distancing guidelines for multiple Nobu outings or a trip to Utah with her pal Fai Khadra. Booker has also been documenting his travels on Instagram, taking a trip to Colorado in July and spending time in California in June. A few years ago, he even documented a trip to Greece. (Jenner follows Booker and has been consistently liking his photos.)

He describes himself as an “old soul.”

While Booker is young, famous, and linked to a high-profile partner, he still considers himself an “old soul” at heart. During a February 2020 GQ interview, he confessed to preferring wired headphones over AirPods, which he’s apparently “lost over five pairs of.” Booker also totes around a camcorder during the season to capture moments with his teammates, something he says reflects his old-fashioned sensibility. “People always say I have an old soul. That’s just the way I was raised, taking after my father and my brother,” he told the outlet. “I’m always listening to older music, ’90s R&B. I’m a little vintage mixed with a little modern and fast-paced.”

He and Drake have a serious bromance.

Booker may be staying mum about speculation he’s dating Jenner, but his love for Drake is well-known. During a 2016 concert in Phoenix, Drake sported Booker’s jersey. Booker also saluted Drake, doing the “Hotline Bling” dance moves after winning a game. “Drake’s my guy. We were just in Toronto recently. He looked out for me. Drake’s a good guy. He’s like a big brother to me,” Booker has said about the rapper, according to NBA.com.

But perhaps the coolest perk to come from Drake and Booker’s friendship is Booker being name-checked in a song. During Drake’s feature on the 2018 Travis Scott song “Sicko Mode,” he raps, “See the shots that I took, wet like I’m Book,” which references Booker. When asked by GQ how he feels about the shoutout, he said: “If I’m in the shower, or at the house chilling, I can go crazy to it. But If I’m out, it kinda takes away from how much I’d otherwise get to enjoy the whole ‘Sicko Mode’ song. You can feel the buildup, and people start looking at me when the time is coming. I’ve heard it from sooooo many people. But definitely another mark in my career I didn’t see coming.” Booker also made a cameo in Drake’s “Chicago Freestyle” music video earlier this year.

Prior to sending strawberry emojis and taking road trips with Jenner, Booker is rumored to have dated another member of her circle. In 2018, Booker was linked to Kylie Jenner’s former BFF Jordyn Woods. Us Weekly even reported that the couple joined Kendall Jenner and then-boyfriend Simmons for a double date. After Booker and Jenner were first spotted together in late April, Woods tweeted “haha good morning” alongside three trash can emojis, perhaps throwing shade at the couple. She has since deleted the tweet, according to Us. Woods has also reportedly dated Jenner’s close pal Fai Khadra, making this social circle very close.