Spoilers for The Haunting of Bly Manor below.

Nobody who watched Netflix’s The Haunting of Hill House could ever forget The Bent-Neck Lady—or the array of terrifying hidden ghosts peppered throughout the show. But the follow-up season The Haunting of Bly Manor features a much bigger range of apparitions and scary visions, some of which are ghosts in the traditional sense, while others are a manifestation of trauma. Below, your guide to the ghosts of Bly Manor.

Throughout the first four episodes of the season, Dani (Victoria Pedretti) is haunted by eerie visions of a man with glowing glasses. She sees him looming behind her whenever she looks at her reflection, so she frantically covers every mirror she sees. In episode 4, “The Way It Came,” it’s revealed that this man is actually not one of the ghosts haunting Bly Manor—instead, he’s a hallucination prompted by Dani’s overwhelming guilt.

Episode 4 opens with a flashback to a young Dani playing with her friend Eddie’s glasses, trying them on for fun. Dani and Eddie are inseparable childhood pals, and nobody is surprised when they get engaged as adults. Eddie’s loved Dani for their entire lives, and she knows she’s supposed to feel the same way, so she goes along with it. But throughout their wedding preparations, it’s clear Dani is having second thoughts—and that she’s attracted to women in a way she isn’t to her fiancé.

After a tense dinner with Eddie, Dani finally admits she’s not sure she wants to get married. “I wanted to want it,” she tells him in the car, explaining how she hoped that if she stuck it out long enough, she’d finally feel the way she was supposed to feel. Upset, Eddie stumbles out of the car into the street—where he’s instantly hit by a truck and killed. In the moment right before the impact, the truck’s headlights reflect off the lenses of Eddie’s glasses, creating the glowing eyes Dani sees in his apparition. After Dani unburdens herself to Jamie (Amelia Eve), her guilt begins to dissipate, and Eddie stops haunting her.

Viola / The Lady in the Lake (Kate Siegel) 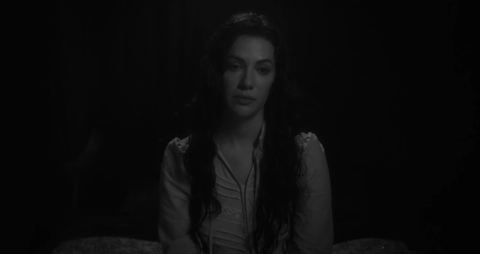 The most powerful of all Bly Manor’s ghosts is The Lady in the Lake, a faceless specter who stalks the hallways of Bly in a long white gown at night. She kills indiscriminately, grabbing her victims by the throat and dragging them into the icy lake on the manor’s grounds.

Episode 8, “The Romance of Certain Old Clothes,” delves into the backstory of the lady, and of Bly Manor, which was once owned by the Willoughby family. The two Willoughby daughters, Viola and Perdita (Katie Parker), compete for the affections of a man, Arthur (Martin McCreadie), who chooses the elder daughter, Viola (played by Katie Siegel, aka Theodora Crain from The Haunting of Hill House).

A few years after giving birth to her daughter, Viola is diagnosed with a terminal lung condition (probably tuberculosis, aka consumption). Though she’s bedridden, Viola refuses to accept she’s dying and outlasts the doctors’ predictions, “held alive by stubbornness alone.” Throughout six years of her “living death,” she becomes consumed with rage and jealousy at her sister and is devastated by her separation from her daughter, Isabel. She makes her husband, Arthur, promise to keep her treasured dresses safely locked away in a trunk in the attic, and never give them to anyone except Isabel. Finally, Perdita kills Viola, having reached the end of her tether after years of abuse.

Viola wakes up in her bed, seemingly from a bad dream—but when she opens the curtains, the windows are blocked off by wooden boards. The door won’t open. Viola is so deeply in denial that it takes her a long time to admit to herself that she’s dead. When she finally does, she…doesn’t handle it well.

After Viola’s death, Perdita marries Arthur, but they’re unhappy together and their finances quickly collapse. Perdita is furious when Arthur refuses to her sell Viola’s valuable dresses, and eventually sneaks into the attic while he’s out. When she unlocks the trunk and lifts one of the dresses out, Viola’s ghost immediately murders Perdita. Viola’s husband and daughter soon leave Bly, and Arthur ditches the trunk of clothes in the lake, suspecting it’s cursed. This final insult drives Viola’s ghost fully insane, and turns her into a malevolent force described as being like “gravity.” Anyone who dies on the grounds of Bly Manor will be trapped there by Viola’s orbit. 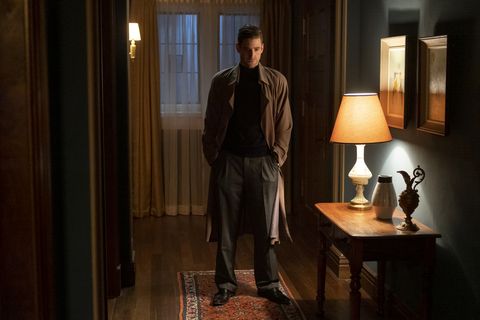 Peter Quint is Henry Wingrave’s (Henry Thomas) valet and assistant, who seemingly absconded from Bly sometime in 1986, the year before Dani comes to the manor, after stealing a lot of money from the Wingraves. In reality, Peter was killed by Viola’s ghost, who dragged his body into the lake and doomed his spirit to be trapped at Bly Manor forever.

When Peter was alive, he had an intense romance with Rebecca Jessel (Tahirah Sharif), Miles and Flora’s au pair. The two share a passionate connection, but Peter is also volatile and verbally abusive towards Rebecca, who seems too consumed by her love for him to see the red flags. Peter planned to run away to America—with a hefty sum of Henry’s cash—and wanted Rebecca to come with him, but Viola kills him the night before they plan to leave. After Peter is believed to have gone missing, Rebecca seemingly dies by suicide out of heartbreak.

In episode 7, “The Two Faces: Part 2,” Peter’s grim backstory is revealed: He came from a toxic household where his father abused him and his mother struggled with addiction. Later, his mother tracks him down and tries to blackmail him for money, which hardens him, cementing his desire to escape and reinvent himself abroad. Even as a ghost, he is determined to get ahead by any means necessary, including stealing what’s not his. He periodically possesses Miles, using the boy’s body to murder Hannah Grose (T’Nia Miller) and terrorize Dani, and he kills Rebecca while possessing her body to ensure she won’t leave him. His ultimate plan is for him and Rebecca to take permanent possession of Miles and Flora’s bodies.

Rebecca is an intelligent and ambitious young woman who’s hired as Miles and Flora’s au pair after their parents die. She’s highly qualified and is training to be a lawyer, which makes Peter question why she would be interested in “a nanny job.” Rebecca explains that she doesn’t see the job that way: “I ask questions of myself and the world around me every day, and that’s what I love to nurture in children.”

Initially, Rebecca seems like a perfect fit for the Wingrave children, but she’s soon consumed by her feelings for Peter. Their semi-illicit romance blossoms despite the disapproval of just about everybody at the manor—especially Hannah and Jamie, who both (correctly) think Peter is bad news. But Rebecca is blinded by her love for him, and though she’s startled when he asks her to come to America with him, she’s also swept away by the picture of their future life he imagines.

After Peter disappears, Rebecca believes he’s abandoned her and is devastated. But things get worse once Peter reappears in ghost form and starts periodically taking possession of her body. She lets him in willingly, trusting him—and Peter repays her by murdering her. While Peter is possessing her body, Rebecca walks into the lake and drowns herself, unable to stop Peter even when she realizes what’s happening.

Rebecca is furious with Peter, who justifies his actions by explaining that it was the only way they could be together. He makes Rebecca his accomplice in his plan to steal Flora and Miles’s bodies permanently, and Rebecca seemingly goes along with him as they take Dani hostage. But at the last minute, Rebecca gives Flora her body back and tells her to set Dani free. “Get her away from here,” she tells Dani. “You get her as far away from this house as you possibly can.” 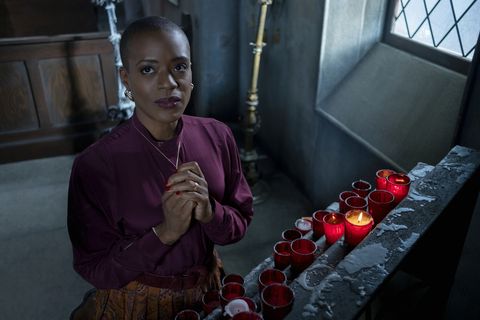 It takes more than half the season for us to realize that Hannah is dead, and even longer than that for her to accept it herself. Hannah has been the live-in housekeeper at Bly for several years by 1987, when she’s murdered by Peter Quint. He pushes her into a well while possessing Miles’s body, but because of the way ghosts work at Bly Manor, nobody (including Hannah herself) realizes she is dead. Because of her denial, she’s able to walk around and physically interact with the world in the same way she always did, but she’s disoriented, and keeps “drifting” into memories that gradually consume her.

In episode 5, “The Altar of the Dead,” Hannah wanders through a series of nonlinear scenes that are somewhere between memory and dream. Her mind is trying to tell her something—mostly through the form of Owen (Rahul Kohl), who appears repeatedly to tell her she’s in denial and needs to pay attention to Miles because “something is wrong” with him. By the end of the episode, it becomes clear that Hannah is dead. But it’s not until the finale that she truly accepts this and stops hiding in her memories, instead emerging to help Dani, Jamie and Owen save the children. 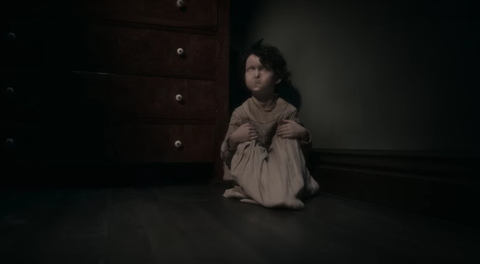 Throughout the season, we see a handful of ghostly characters whose faces have been eroded, just like Viola’s. In episode 8, they’re all revealed to be Viola’s victims over the years: Perdita, whom she murders in the attic; a little boy she believes is her own daughter, whom she kills in one of the bedrooms; and a plague doctor, who, she murders during a period when Bly Manor is turned into a quarantine house for the sick. Once dead, her victims are trapped in Viola’s “gravity well,” and their facial features gradually fade along with their memories. 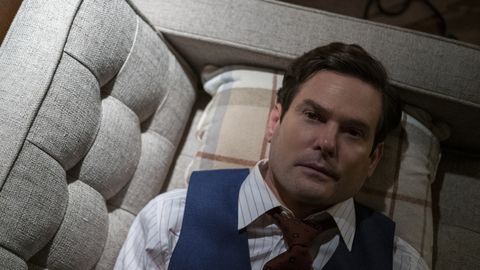 Henry Wingrave spends most of the season locked away in his London office drinking, which is a big 2020 mood, but not a spectacular choice mental health-wise. As he tries to bury himself in work, he’s haunted by a grinning doppelgänger who taunts him about his failures and past sins. His biggest transgression? Sleeping with his brother Dominic’s (Matthew Holness) wife, Charlotte (Alex Essoe). In fact, it turns out he’s Flora’s biological father. After Dominic learns of their affair, he banishes Henry from Bly and takes Charlotte on a trip to India to try and recreate their honeymoon.

After Dominic and Charlotte die in a mysterious accident while abroad, Henry inherits Bly Manor but never goes there himself, honoring his dead brother’s wish. He tries to hide from his grief and guilt through workaholism and drinking, but instead they take the form of his alter ego. He spends most of the season ignoring phone calls from Bly Manor, but ultimately realizes something is very wrong at the house and drives to investigate. Once he makes this decision, his alter ego disappears. You know what they say—if you try to ignore your issues, they’re just going to take the form of a creepy doppelgänger and torment you until you go insane.