What did former President Barack Obama think of his wife Michelle Obama’s big fashion moment at Joe Biden’s inauguration? A Washington, D.C. book club asked him, and boy, did he have some thoughts and high praise for the former First Lady.

Barack made a surprise virtual appearance at MahoganyBooks and Very Smart Brothas Bookclub’s recent discussion on his memoir A Promised Land. When the members asked about Michelle’s viral outfit, the Sergio Hudson belted ensemble she chose to wear, Barack was candid with his opinion. 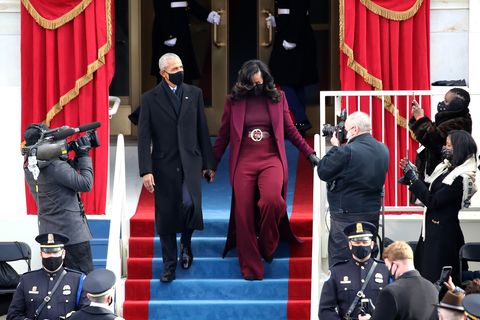 “I don’t know what it is about y’all, with Michelle and her belts,” Barack started, according to Marie Claire UK. “I asked Michelle about it at dinner the other night. I said, ‘Listen baby, you are gorgeous. You know, I understand completely why you are a fashion icon.’ But, I said, ‘Was your hair different? Because it didn’t look that different.’ Anyway, so I don’t have an answer other than just knowing she looks good and looks better than me. I understand that.”

Michelle’s hair, worn in bouncy curls, was done by her longtime hair stylist Yene Damtew. ELLE.com spoke with Damtew about how the two chose the look.

Damtew says because the two have such a strong relationship from working together during Michelle’s time in the White House, they rarely ever have to discuss looks for events. The former FLOTUS “trusts me to pick a style that will work, and I trust her to allow me some creativity,” Damatew said.

Damtew collaborated with Michelle’s other style team members—Meredith Koop, Carl Ray, and Christy Rilling—on her inauguration look. “I knew Mrs. Obama would be wearing a monochromatic look, so I knew the hair would have to stand out on its own,” she said. And it sure did.