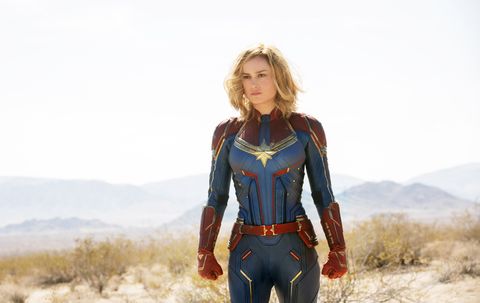 Captain Marvel, Marvel’s newest, female-led superhero movie, has officially broken records. According to The Hollywood Reporter, it had the highest-grossing weekend for a female-fronted movie ever. The movie, which stars Brie Larson as the titular character, has earned $455 million worldwide in its International Women’s Day opening weekend—$153 million of that in North America alone.

The last film to beat the record was 2017’s Beauty and the Beast, starring Emma Watson. Captain Marvel surpassed the Disney film, which made $357 million. Within the Marvel universe, the only other female-fronted film that was able to accomplish a similar feat was Wonder Woman, whose titular character was played by Gal Gadot. In Wonder Woman‘s opening weekend, it grossed $103 million.

Captain Marvel also marks the second-biggest opening for a comic book movie, right after 2018’s Avengers: Infinity War, which made a total of $640.5 million dollars. Topping off its list of accolades, the film also had the sixth-best worldwide premiere of all time and the fifth-best international opening weekend, ahead of Star Wars: The Force Awakens, which made $281 million in 2015.

Watch the official trailer from the groundbreaking film below.

Starr Bowenbank
Editorial Fellow
Starr Bowenbank is an editorial fellow at ELLE.com who writes about all things pertaining to news, pop culture, and entertainment.
This article was originally published by Elle.com. Read the original article here.
[dp_demo_ad_fullx90_2]

<i>Project Runway</i> Season 19, Episode 7 Recap: Fur Sure
Paris Hilton Congratulated Lindsay Lohan On Her Engagement Despite ‘Past Differences’
Who Is Echo? <i>Hawkeye</i>’s Latest Villain Is Getting Her Own Show Too.
Lisa Manobal of BLACKPINK Just Made Her Runway Debut For Celine
Photos of Celebs Next to the Real-Life Actors They Portrayed On-Screen