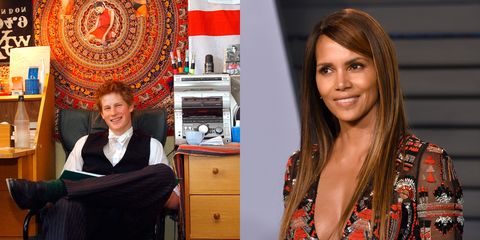 Prince Harry’s gloriously bro-y teenage dorm photos from Eton College are re-circulating the internet today, and one detail in particular has caused quite a stir.

Harry having a pinup of Halle Berry when he was at Eton is just the most delicious foreshadowing, is it not?

Among his multiple posters of half-naked women is a photo of Halle Berry, which is the precisely-cut centerpiece of his dorm wall. It caught the attention of Berry herself, who tweeted the perfect reply: “Ok #PrinceHarry, I see you!” she wrote. Teenage Harry would die!! He would DIE.

The photos are from June 2003, so it was only almost forever ago that 18-year-old Harry did this.

Nabela Noor’s New Beauty Collaboration Celebrates Her Bangladeshi ﻿Heritage
The 13 Best Round Brushes For Salon-Worthy Blowouts
A Complete Timeline of Kourtney Kardashian and Travis Barker’s Relationship
<i>Ahsoka</i>: Everything We Know About the New <i>Star Wars</i> Series
Kendall Jenner Kisses Her Boyfriend Devin Booker In Public For the First Time