When Entertainment Tonight posted about the news on Instagram, one commenter said, “They should have 4 years each for the college kids that should have gotten in—ugh.” Loughlin’s Full House co-star Candace Cameron Bure, who played Loughlin’s TV-niece D.J. Tanner on the show, saw the comment and responded with this emoji: 😔. 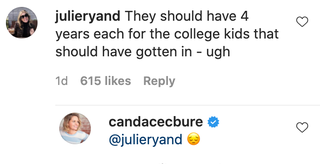 Per the Associated Press, Loughlin said the following when she addressed the judge: “I made an awful decision. I went along with a plan to give my daughters an unfair advantage in the college admissions process and in doing so I ignored my intuition and allowed myself to be swayed from my moral compass. I have great faith in God and I believe in redemption, and I will do everything in my power to redeem myself and use this experience as a catalyst to do good.”

In January, a source told People that Loughlin had hired someone to coach her should she be sentenced to prison. “She has someone who is advising her what to do in case she loses her case and goes to prison,” a source told People. “The advisor is there to help her learn the ropes. That’s not to be construed that she thinks she’s going to lose her case. Lori is a planner, and she is doing what she needs to do for all contingencies.”

On Friday, Assistant U.S. Attorney Justin O’Connell said Loughlin “was focused on getting what she wanted, no matter how and no matter the cost,” and that she was being sentenced to prison to prove that “everyone no matter your status is accountable in our justice system.”