Days after their first public sighting over the weekend, Lily James and Chris Evans were photographed by paparazzi on what appeared to be a wholesome park date in London. The two were shot eating ice cream, sitting in the grass, and laughing and talking with each other on Wednesday. Did they look into each other? Yes, adorably: 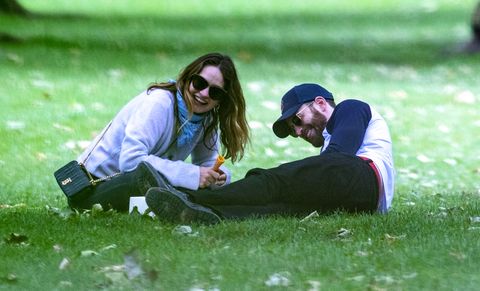 Both dressed casually: James was in jeans, a pink graphic t-shirt, and a cream cardigan with a blue bandana as a face covering. Evans, meanwhile, wore a navy and gray t-shirt, dark denim, a New England Patriots bandana as his face covering, and a Boston Red Sox hat.

The two were first seen together on Saturday in dressier attire. The two actors were photographed leaving London’s Mark’s Club in Mayfair late and getting into the same cab to head back to Evans’ hotel and presumably spend more time together. James wore a red silk dress with a trench coat, while Evans was in a black suit.

Neither James nor Evans have commented on whether they’re dating or just friends. But both appear to be single right now. James, well known for her role as Disney’s live-action Cinderella, was last linked romantically to The Crown actor Matt Smith, whom she dated for five years. The Sun reported in December that they broke up. James and Smith never commented on whether that report was true or false. They were last photographed together in May 2020.

Us Weekly was told in January that Evans was single and dating but non-exclusively at that point. A source told the outlet that the Captain America actor was aiming to “be more private with his love life.”