The wait is over: The Handmaid’s Tale is back after two and half years. Unfortunately, COVID-19 halted the production of season 4, but finally, we’re heading back to Gilead, and the fifth episode of season 4, titled “Chicago,” premieres Wednesday, May 12 at 12 a.m. EST on Hulu.

Hulu released a synopsis of what fans can expect for the upcoming fourth season:

June (Elisabeth Moss) strikes back against Gilead as a fierce rebel leader, but the risks she takes bring unexpected and dangerous new challenges. Her quest for justice and revenge threatens to consume her and destroy her most cherished relationships.

Over the past two weeks, the first four episodes of season 4 premiered, and you can get a breakdown of all the shocking moments (and traumatizing deaths) right here. 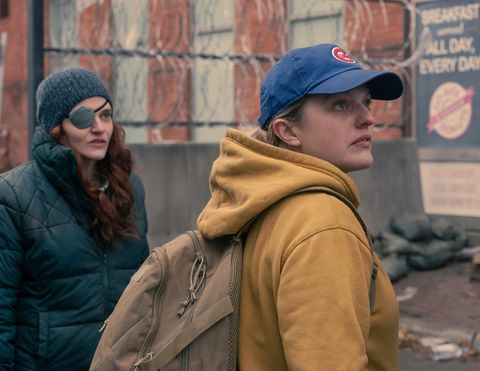 A still from The Handmaid’s Tale season 4 episode 5, “Chicago”.

Hulu also shared all the episode titles for the 10-episode season, along with their release dates, so you can plan your spring viewing schedule accordingly.

Episode 402: “Nightshade” streaming as of April 28

“It was something that we toyed with on season 3—something we’d been trying to make work—but it’s always very difficult for the lead actor to direct,” Moss told Deadline in January. “We finally figured it out this year, and I’m so glad that we did, and honored, and all of that, and then it just ended up being so much more fun, and so much more fulfilling and interesting, than I ever thought it would be.”

Watch The Handmaid’s Tale on Hulu

Joe and Jill Biden Pay Tribute to Dog Champ’s Life: ‘Everything Was Instantly Better When He Was Next to Us’
The 20 Best Amazon Prime Day 2021 Deals for Your Home
Hailey Bieber Wore an Ab-Baring Nude Cutout Dress to Meet the French President
Here’s When Every Episode of <i>Loki</i> Will Drop on Disney+
All About Jake Bongiovi, Millie Bobby Brown’s Reported Boyfriend