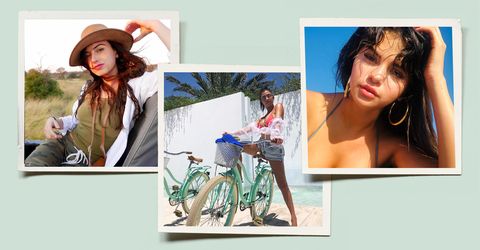 Breakups are awful. One needs only to listen to the music of Adele to understand true heartbreak. But women are resilient: perhaps it’s a symptom of long suffering under a patriarchal system that consistently devalues us, but we’re fighters, which means we almost always win at breakups.

Look back at our celebrity history books: Kim Kardashian and Kris Humphries, Nicole Kidman and Tom Cruise, Jennifer Lopez/Jennifer Garner and Ben Affleck. Those that triumphed here are clear. The others nurse deep relationships with their vape pens.

This summer we’ve been given a new flock of all-star women crushing the post-relationship phase of their relationship. Kourtney Kardashian, Selena Gomez, and Cazzie David have all been involved in the most high-profile breakups of the summer, but each has handled it with grace—in her own way. There’s a lot to be gleaned from these three on how you, too, can win your next breakup, even if your ex immediately gets engaged to someone else. Pick your own adventure and follow along with their strategies, if you so choose to end things in these final days of summer.

The tumultuous breakup between Kourtney and Younes Bendjima was probably (I’m speculating) fueled by one of the following: the TMZ footage of Younes flirtatiously wrestling on the beach with a white thong-wearing mystery woman, or his shady and shaming comments on Kourtney’s thong Instagrams.

All we know for sure is that, either way, thongs were involved.

Thongs continued to star in Kourtney’s summer: there they were in pools, Romanesque doorways, and on Calabasas lounge chairs. Not bad for a girl with the “least interesting face to look at.” (Kim’s words, not ours.) Kourtney’s post-breakup strategy was a classic: the revenge body. Putting that revenge body all over an Instagram account with millions of followers, and then in a Calvin Klein campaign, is just making sure a certain someone notices.

Kourtney’s strategy was a team effort. She stayed silent on the issue—remember that when there’s a bigger person, there’s also a smaller one—while Bendjima tried to pass off the woman he was rolling around a beach with as just a friend. Kourtney’s sister Khloe stepped in to fill the silence. “Alexa,” she commented on Bendjima’s post, “play ‘Heard It All Before’ by Sunshine Anderson.”

Some might say the summer has been rough for the songstress. She survived a breakup—again!—with the Biebs, who then turned around and got engaged to Hailey Baldwin mere minutes later. The heart wants what it wants, until it does not. However, in the face of adversity, Gomez didn’t panic. You know what they say: Clear eyes, live Instagram feeds, can’t lose.

While Kourtney alerted everyone that she too could wear a thong, Gomez reminded everyone that being one half a Jelena is still pretty rad. Gomez’s first stop on her post-breakup tour was Newport Beach, California (Welcome to the O.C., bitch) where she boarded a dang yacht. From there she went live to millions to reassure them that being Selena Gomez still means “life is good,” she said to her 141 million followers.

If there were any doubts of that, Gomez squashed them by repeatedly Instagramming herself with Cardi B. Breakups are all about the comparisons, so ask yourself: would you rather be running around with Cardi or biking then sobbing with a guy who’s holding onto some few precious mustache hairs?

Oh, and if all else fails, take one last note from Gomez and get bangs. That always works.

As a Pete Davidson and Ariana Grande-enthusiast, I’ve had to leave my bias at the door. David handled this horrific breakup like a world-class champ, mostly by pretending it wasn’t even happening in the first place. Pleading ignorance is already a great excuse for getting out of all sorts of things you don’t want to do, acknowledging a breakup chief among them. David perfected the art when she returned from Africa and posted an Instagram with the caption, “Been in Africa, what’d I miss??”

What did you miss? Girl.

Elle Woods threw chocolate at the TV, so Cazzie David could eat gummy bears on the beach. Wine, Cheetos, and gummy bears can be a girl’s best friend, especially during a difficult time. Take advice from a professional and don’t ask for your stuff back: ask for a bag of flamin hot Cheetos instead.

Lastly, David became a published author and to me, someone currently writing something on the internet, writing things on the internet is the highest level of success. While Davidson is holding Grande’s grandes (Starbucks, you sickos), David is out here typing words that get put on a website. My mom says that there’s no greater accomplishment, and I have to agree.