It’s hard to believe it was a little more than a year ago the Royal Family was meeting at the Sandringham Summit after the Duke and Duchess of Sussex announced on their Sussex Royal Instagram account that they had decided to live a more independent life as a family, with the goal of carving out a “progressive new role” within the institution and to “step back as senior members of the Royal Family and work to become financially independent.”

The Sussexes had utterly captivated the world with their fairy-tale romance and 2018 wedding, which had modernized the monarchy, yet Prince Harry and Meghan were struggling. Duchess Meghan told ITV’s Tom Bradby, following their landmark 2019 Africa tour with then-four-month-old Archie, that the intense media spotlight had been overwhelming. “It’s not enough to just survive something right?” she said. “That’s not the point of life. You’ve got to thrive; you’ve got to feel happy.”

Now, the full story is starting to be told with Prince Harry’s revealing interview with close friend and Late Late Show host James Corden in his signature Carpool Karaoke series—this time on a double decker bus, reminding Harry of his London home.

Harry told Corden that he was “stepping back rather than stepping down,” and he “did what any father and husband would do,” after admitting the “toxic” tabloid attacks in the UK were “destroying my mental health.”

At the end of 2019, the Duke and Duchess made the difficult decision to take a six-week break and spent several months in the peaceful environs at the Mille Fleurs estate in Canada on the picturesque coast of Vancouver Island. They evaluated their future before announcing that they intended to make a future in North America more permanent. The news came after a leak in The Sun newspaper on January 7, 2020 laid bare their tentative plans, just as they’d returned to London to discuss their future.

The couple quickly released a detailed roadmap of their “half in, half out” model, catching the Royal Family off guard. But the Queen quickly ruled it out as untenable. On January 13, just days after the news broke, and Queen Elizabeth, Prince Charles, Prince William, and Prince Harry met at Sandringham, the Queen issued the following statement: “My family and I are entirely supportive of Harry and Meghan’s desire to create a new life as a young family. Although we would have preferred them to remain full-time working Members of the Royal Family, we respect and understand their wish to live a more independent life as a family while remaining a valued part of my family.”

ELLE.com has also learned that the Queen was “sympathetic and supportive” of Harry in a recent phone call ahead of the 12-month review period. Queen Elizabeth is “delighted about her grandson’s happiness,” a source shared with ELLE.com. Harry reassured her that he and Meghan “intend to carry on their duty to the family,” and reiterated he has no intention to embarrass the family despite suggestions in the tabloids that an upcoming tell-all interview with Oprah Winfrey could damage relations. The Queen remains supportive of Harry to live a more private life and as a grandmother only wants his family to be able to thrive, knowing her grandson had been struggling.

The Duke and Duchess of Sussex on March 5, 2020, during their last week of engagements as working senior royal family members.

As 2021 begins, the Sussexes have achieved unimaginable success after a devastating loss when Meghan miscarried in July, and a year that started with anguish and uncertainty.

They have “no regrets about stepping back,” according to a friend of the couple. “The change from what we’ve seen from January last year is remarkable. They feel settled. They feel excited about what’s to come.”

Prince Harry told James Corden, “Whatever decisions are made on that side, I will never walk away. I’ll always be contributing. My life is public service, so ­wherever I am in the world, it’s going to be the same thing.”

After a year that was meant to be a “listening period,” Prince Harry and Meghan have taken counsel from friends and others as they established their Archewell nonprofit that will be the centerpiece for their work going forward. “They have been able to get counsel from some of the most incredible people around the world, people out there who genuinely want them to succeed and wanted to help them and see the power in what they’re able to do. They’re getting a lot of great support from friends that they’ve made over the years who are proving to be very, very generous with their time and advice,” a source close to the Sussexes shared with ELLE.com.

Already, they have cemented a successful deal with streaming giant Netflix to produce content in the future, and in 2021, we will finally see the release of Harry’s landmark mental health series on Apple Plus with Oprah after production had to be suspended due to the impact of COVID-19. The couple also signed a multi-year partnership with Spotify, which will be an additional opportunity to amplify the issues that remain so important to them: mental health, conservation, racial and gender equality, and education.

Despite the pandemic, the Sussexes have continued with their humanitarian work, stepping in to help the community when they could. Shortly after setting up their base in Los Angeles, the couple were seen delivering meals with Project Angel Food to the vulnerable and home bound in West Hollywood in April. A few months later, they were back at it again, masks on, handing out school supplies with the charity Baby2Baby to families in need at an elementary school near where Meghan grew up. While the pandemic has had an impact on in person engagement, Prince Harry and Meghan have found alternate methods to reach young people through Zoom calls and other means to provide hope. 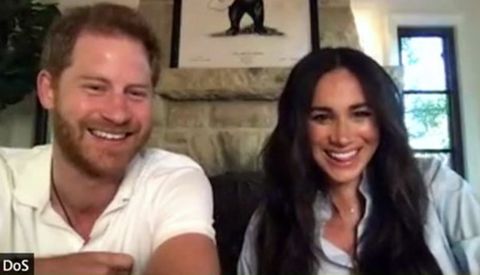 The Duke and Duchess making a recent surprise virtual appearance at a Get Lit youth poetry Zoom class from their California home.

“They feel so much better about where they are and what their prospects are for the future. They’re looking forward to their work. Projects which were being implemented are finally being brought to fruition. Everything will start to pick up pace in 2021,” a friend of the couple told ELLE.com.

While the global pandemic has required everyone to adapt, there was also a silver lining for the Sussexes. The couple, who had initially made the decision to step back hoping to lead a more private life away from the spotlight, were able to enjoy many of Archie’s memorable first milestones. Celebrating International Day of the Girl, Meghan shared with Malala Yousafzai, “We are fortunate to have the time to watch him grow.” Harry revealed, “We were both there for his first steps. his first run, his first fall, his first everything.”

In fact, life in Montecito, Harry admitted to Corden, is pretty idyllic! He spoke proudly about Archie, as any new father would, revealing Archie’s first word was crocodile, perfect for Harry, who is patron of a number of African conservation charities. Corden replied, “Crocodile, that’s a big word.”

The Duke also shared that the Queen gave them a very surprising, unique Christmas gift. “Interesting, my grandmother asked us what Archie wanted for Christmas, and Meg said a waffle maker. She sent us a waffle maker for Archie. Breakfast now, Meg makes up a beautiful organic mix. In the waffle maker, flip it, out it comes. He loves it. And now I have waffles for breakfast. A bit of yogurt, a bit of jam on top, I don’t know if that’s the right thing to do. A bit of berries, maybe, a bit of honey, a bit of syrup…Archie wakes up in the morning and literally just goes: ‘Waffle? Done.’”

COVID has not just allowed the family to spend more time together; it’s also helped the Royal family reconnect. Prince Harry was very concerned when both his father and brother contracted the virus during the spring. The Sussexes have “been keeping in touch with the family throughout the COVID pandemic. It’s brought everyone closer together,” a source tells ELLE.com.

Harry told Corden he and Meghan keep in touch with the Queen and Prince Philip so they can see a growing Archie via Zoom.

It’s too soon to tell when Harry and Meghan might return to London given the continued global pandemic, but Harry certainly has his eye on Prince Philip’s 100th birthday June 9 and the Queen’s official birthday celebration Trooping the Colour June 12, the same week, to reunite with family. With Meghan’s recently-announced pregnancy, things are in flux.

William and Harry are hoping to also come together to unveil the statue for Princess Diana on July 3 at Kensington Palace on what would have been the Princess of Wales’ 60th birthday. A friend of the couple told ELLE.com, “You have all of those signature moments, these key events that they would hope to travel for, but they will have to see what the status is of medical guidance in the next few months.”

Until then, Harry and Meghan are firmly focused on their future, Archie, and the huge strides they have have made in just nine months with their Archewell nonprofit.

Carolyn Durand
Carolyn Durand is a royal contributor for ELLE.com and Oprah.com who has covered the royal family for more than 15 years.

Icon x Icon: Tracee Ellis Ross and MAC Are Teaming Up For The Ultimate Holiday Gift
Megan Fox Will Wear Whatever She Wants, Thank You Very Much
Penn Badgley Explores Joe Goldberg’s ‘Primal’ Parenting in <i>You</i> Season 3
Free the Nippleless! From Ourselves and the Shame of Living in a Society That Rarely Acknowledges Us
Halle Berry Gives a Heartfelt Speech at ELLE’s Women in Hollywood Event