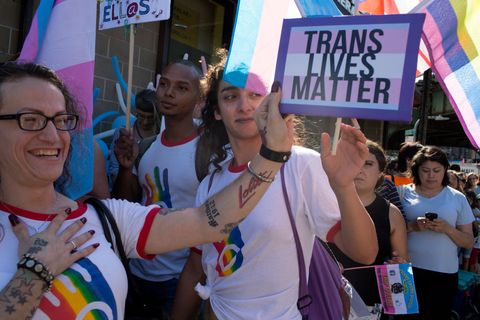 Today, November 20, is the Transgender Day of Remembrance, an international day of action to remember and mourn those who have lost their lives to transphobia. That list is long: More than one in four trans people have experienced “bias-driven assault,” and, in the US, forty-one percent attempt suicide at some point in their lives. But this year, with hate crimes spiking across the board, that tragedy looks more than ever like an emergency. It’s vital that cisgender women, especially those of us who call ourselves feminists, understand this crisis. Without transgender equality, gender equality cannot exist.

2018 is set to be the deadliest year on record for transgender people — as was last year, and the year before that, and the year before that. The transgender murder rate has actually risen every year since it started being measured. In late 2017, the New York Times estimated that deaths were happening at the rate of one or two murders per week. That death rate is steadily picking up speed.

The danger is particularly pressing for trans women, with trans women of color being singled out for particular brutality. Of the 20 transgender women murdered this year, 14 were black. Trans women die because their bodies are devalued in every way—by racism, sexism, transphobia, capitalism. They die because systemic discrimination makes them more likely to be poor, or homeless, and thus more vulnerable to violence. They die because they are not given the necessary resources or support to transition, and have to live with gender dysphoria until they become suicidal. They die because blackness, womanhood and trans identity are all dangerous things to carry, and every day makes it more likely that they will fall afoul of someone who hates some or all of who they are.

Where cis women can choose to push and challenge gender stereotypes, transgender women, men and non-binary people have to oppose them in order to live as their true selves. Trans people, and especially trans women, routinely die for exercising the freedoms cis feminists are working to attain. If we don’t have their backs, it shows that we care about those freedoms less than we’d think. This isn’t rocket science: If you’re a cis feminist, and you want to overthrow the gender binary, you should be talking to people who actually are non-binary. You should also be prepared to show up for those people when the system tries to wipe them out.

Trans people, and especially trans women, routinely die for exercising the freedoms cis feminists are working to attain. If we don’t have their backs, it shows that we care about those freedoms less than we’d think.

The time to show up is now: educate yourself about the terminology, attend rallies to oppose bathroom bills, speak up in defense of the trans people in your community. There is a reason the transgender murder rate is rising so rapidly and consistently. It started to accelerate in 2015, around the time the US presidential election kicked off. Trump, and Trumpism, rose to power by stoking hatred of marginalized people and fear of “social justice warriors” and “political correctness gone too far.” That hatred has increasingly boiled over into unrepentant fascist violence. In 2017, the rate of all hate crimes spiked by 12 percent. Anti-trans hate crimes ranked among the most common hate crimes in several major cities, despite trans people only comprising 0.6% of the adult population.

The past few years have seen a rise in trans visibility, but that rise comes with increased backlash. Conservatives drummed up votes in that 2016 election with “bathroom bills,” intended to keep trans people from safely accessing public bathrooms that matched their gender. Trump fed red meat to his base by attempting to ban transgender people from military service (though the ban was later overturned in court) and ultimately moved to legislate trans identity out of existence.

Even as this went on, many on the left cast trans rights as frivolous niche concern. Trans activist Jennifer Finney Boylan recalls hearing trans rights described as a “boutique issue” in the wake of the 2016 election: “A boutique — a place where you’d shop for, say, artisan pantyhose — is not the first place I’d associate with an individual’s quest for equal protection under the law,” she wrote. Writing trans rights off as a niche issue or a soft concern has hard consequences. When it comes time to punch down at “identity politics,” trans people are always first to take the hit. But when a group of people is so pervasively framed as a threat, scapegoated for every real or perceived social ill, and dehumanized for the amusement of a bigoted public, it should come as no surprise that some members of the public will also, well, punch them.

Cis women cannot simply stand by and allow swaths of the population to be tormented, eliminated or killed for violating gender norms—especially not if we hope to loosen the restrictive gender norms that so often define our own lives. For cis women to stand with trans people—and particularly trans women — is morally right, but it is also the only real way to shake the hold patriarchy and male dominance have on our politics and our society. If we want freedom for women, we have to demand freedom and safety for trans women—and for trans men, and for non-binary people at every point along the spectrum. None of us are safe until all of us are safe.