Jada Pinkett Smith is shutting down singer August Alsina’s claims that he and the Red Table Talk host had a years-long affair, and that her husband, Will Smith, supposedly gave his blessing for the extramarital relations.

Alsina revealed details regarding the rumored affair during an interview on The Breakfast Club radio show with Angela Yee. The singer claimed that he met Pinkett Smith through her son, Jaden Smith, and that he went on family vacations with the Smiths, as well as attended the 2017 BET Awards together.

“I actually sat down with Will and had a conversation due to the transformation from their marriage to life partnership…he gave me his blessing,” said Alsina during the interview. He went on to admit that he thoroughly fell in love with the Smith family matriarch during their alleged affair. 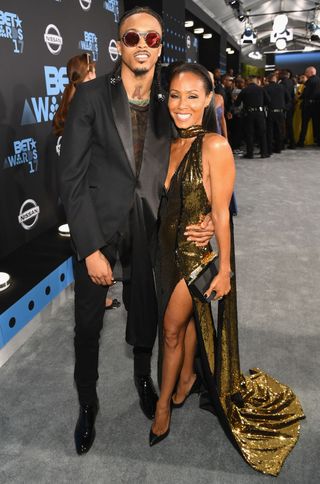 “I totally gave myself to that relationship for years of my life, and I truly and really, really deeply love and have a ton of love for her. I devoted myself to it, I gave my full self to it—so much so to the point that I can die right now and be okay with knowing that I truly gave myself to somebody,” revealed Alsina.

When asked why he continues to speak out regarding what allegedly happened within his private life, Alsina declared that he’s solely attempting to combat naysayers who say he’s lying regarding his time with the actress.

“I also don’t think that it is ever important for people to know what I do, who I sleep with, who I date…but in this instance it is very different because as I said, there are so many people that are side-eyeing me, looking at me questionable,” explained Alsina. “I have lost money, friendships, relationships behind it and I think it is because people don’t necessarily know the truth. But I have never done anything wrong.”

Alsina continued to praise the Smiths as being a family who remain dear to him. “I love those people literally like my family. I don’t have a bad thing to say about them,” concluded the artist. “They are beautiful people.”