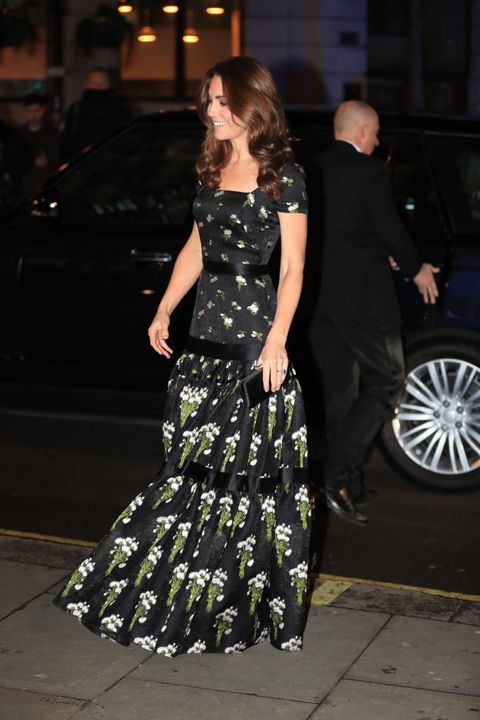 Another evening event, another opportunity for Kate Middleton to bring out a stunning gown. The Duchess of Cambridge just arrived at the NPG Portrait Gala this evening at the National Portrait Gallery in London. She chose black floral Alexander McQueen gown tonight—one she appeared to have originally wore at the BAFTA Awards in 2017, though the dress may have been altered slightly. She wore her hair down and accessorized with just a black clutch.

Wearing the dress at the 2017 BAFTA Awards.

This is Kate’s second event today. She started her day at the Henry Fawcett Children’s Centre, where she learned “how Lambeth Early Action Partnership are using the Parent and Infant Relationship Service (PAIRS) to support parents, carers and their children,” according to the Palace. For that event, Kate dressed colorfully, choosing a lavender Gucci bow blouse and black Jigsaw trousers.

Tonight may be Kate’s first ritzy evening event this week, but it’s not the only event she has really dressed up for. On Monday, Kate wore an elegant fitted red coat dress by Catherine Walker for the Commonwealth Day church service at Westminster Abbey. She accessorized with a matching red hat and tan suede heels.

Kate’s last gala was at the Victoria & Albert museum in mid-February. She wore a duel-toned pink and cream Gucci dress for that occasion. With her hair down, she had distinct fairy tale princess vibes:

That was a double event day for Kate, too. The Duchess of Cambridge started that work day at the Royal Foundation’s Mental Health in Education conference in London, wearing a Dolce & Gabbana tweed blazer and skirt. Hours later, she completely changed into her Gucci dress for the 100 Women in Finance’s gala at the museum.