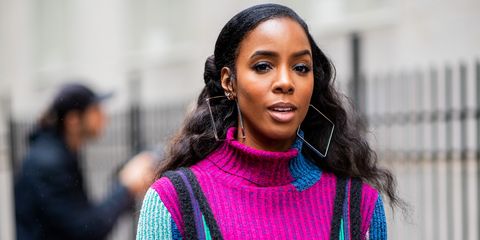 Kelly Rowland had a front row view of the fight that broke out between Cardi B and Nicki Minaj at Harper’s Bazaar ICONS party Friday. The singer had been trying to get a photo with Minaj and Lala Anthony when Cardi threw her shoe (after Minaj allegedly stepped on Cardi’s train), and the drama began. But Rowland isn’t taking sides; in fact, she’d rather all the media attention be on a more worthy cause.

“I think in a time where Serena Williams is fighting for equality—I love both Nicki Minaj and Cardi B and I think that they are extremely talented—and in a time when she is fighting for women’s equality, we just can’t be fighting,” Rowland told E!. “There’s no time for us as women to fight, and they are just so talented, and I just genuinely love them both so much, but it’s just not the time. We have way bigger issues as women, you know what I mean? So I don’t know. I’m Switzerland, I don’t f*cking know.”

Cardi B reportedly has no regrets about the fight and would throw her shoe at Minaj again given the chance. Minaj, meanwhile, said she was “mortified” and “humiliated” it happened.