What would life be like if you lived forever? That’s the existential question raised by The Old Guard, Gina Prince-Bythewood’s edgy, inclusive, and highly entertaining action thriller, recently dubbed one of Netflix’s most-watched original movies of all time. For KiKi Layne’s Nile, it goes even deeper: If Charlize Theron asked you to join a group of crime-fighting immortals, would you choose to battle injustices for centuries and risk never seeing your family again? Speaking via Zoom (naturally) from her childhood home in Cincinnati, Ohio, Layne isn’t so sure. “It would be tough to live a life without any of the people you loved, where you can’t even build new relationships,” she says. “That connectivity is so important as humans. I wouldn’t want to live like that.”

Though The Old Guard, based on the comic book of the same name by Greg Rucka (who also wrote the screenplay), is a superhero fantasy about warriors with regenerative healing powers, the loneliness they experience is apt as we continue to quarantine and social distance amid rising coronavirus cases. Layne herself recently reunited with family after months of solo self-isolation in L.A. “Our lives have been completely turned upside down,” she says. “[Quarantining alone] was cute the first few weeks, then I was like, ‘This isn’t gonna work.’” Unlike her character, a former Marine and newly minted mercenary who’s forced to endure solitude for eternity, Layne was fortunate to be surrounded by relatives for the film’s at-home premiere. “It was quite a blessing that I got to share this special moment in my career with the people I love the most.”

After bursting into public consciousness as the resilient, wise-beyond-her-years Tish in Barry Jenkins’s 2018 drama If Beale Street Could Talk, 28-year-old Layne is making the most of her respite from the Hollywood grind. As a Black woman, she’s emboldened by the watershed moment for race in our country. “I feel more encouraged to ask for certain things, point out [inequalities], and use my voice to hold people accountable,” she says. “I’ve been trying to figure out ways to use my craft and whatever power I’m tapped into to make [demands] that, before all this happened, I wasn’t quite sure I could ask for.” 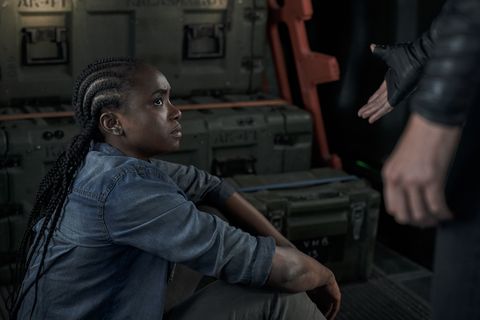 KiKi Layne as Nile Freeman in The Old Guard.

Here, more from Layne about her new role, advocating for herself in Hollywood, and the best advice she ever got from Charlize Theron.

You’ve been very vocal about race and representation on Instagram lately. What are the biggest obstacles you’ve had to overcome in your career?

In Hollywood, you need work to get work, which can really drive you insane. Even now, it’s still a thing: How big is your name? Are you actually that marketable? I’m grateful there’s starting to be a shift. Part of it is because artists are taking more control over how their stories get told, and beautiful, powerful independent films are committed to finding the right person. I’m very grateful to Barry Jenkins, who took a chance on me. I didn’t have any real credits, but he believed I was the person for the role. Same with Gina [Prince-Bythewood]. The biggest [obstacle] is trying to get past the Hollywood mindset of only hiring the big, bankable talent.

It’s refreshing to see a film like The Old Guard that features two strong female leads. What drew you to the role, and what kind of training is required to be a Marine?

I’ve always wanted to do action, so when I saw the opportunity and learned that Gina was directing and Charlize was attached, I just thought it was dope. And once I read the graphic novel and saw this cool world with characters that are grounded and relatable, I was even more excited. Training for [the film] was definitely an experience—I’ve never done anything that physical before. I worked with weapons for the first time, did stunts and choreography, and boxed to put on muscle and strength. 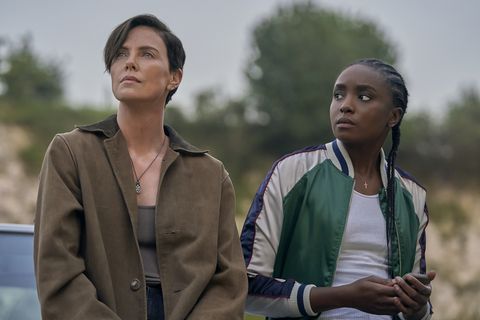 Layne with Charlize Theron in The Old Guard.

It was insane. We got to train a bit with each other beforehand, but the first thing we shot was our fight scene on the plane. It’s an honor to get your ass whooped by Charlize Theron! [Laughs] What she represents for women in this genre—that we’re capable of being kick-ass leaders—is amazing. Having my [action] introduction be alongside her made [the experience] that much more special.

Did she give you any advice for breaking into the action realm?

She told me to relax. [Laughs] She also taught me how to heal my bruises, because we were getting pretty banged up. She came to set one day with all these different creams—it was like the bump and bruise kit. I had some nasty, nasty bruises.

Netflix’s @strongblacklead account praised Nile’s hair. Now that states are reopening, have you braved the salon yet?

Not yet. My cousin did these crotchet braids, but I’ve been crocheting and braiding my own hair since college. So I was just like, “All right, we’re back at it!”

Each immortal is forced to deal with losing loved ones, which feels eerily relatable in the midst of a pandemic. Joe and Nicky’s struggle to maintain their relationship after they’re captured is particularly inspiring—and romantic!

I was so happy to see the inclusion of a gay relationship, and these two gay men as heroes and warriors and kick-ass fighters. Their love story is beautiful, and it needs to be shown more. Where are all the gay superheroes and badasses in Hollywood? [The industry acts] as if those people don’t exist in real life.

There’s a great sequence where Nile listens intently to Frank Ocean’s “Godspeed” on her iPod. Are you a fan of his?

I’m not a super big fan, but I was happy to hear that song. As soon as Frank started singing, I was like, “Yeah, this is perfect.” When it comes to music, Gina knows her shit. She picks the perfect songs for those really special moments.

Who else do you listen to? Do people sing the “Kiki, do you love me” lyric from Drake’s “In My Feelings” to you 24/7?

Oh my goodness, that was the longest year of my life! [Laughs] I’m spending the rest of my career reclaiming my name. I gotta meet this guy and be like, “You know what, Aubrey? I got a bone to pick with you.” My favorite artist is J. Cole. I like Kehlani a lot. Teyana Taylor is dope too.

“The biggest [obstacle] is trying to get past the Hollywood mindset of only hiring the big, bankable talent.”

Nile forgoes having a relationship with her family to protect the mortal world. Do you think she feels fulfilled at the end of the movie, and what’s next for her if there’s a sequel?

I would definitely love to do another film and dive deeper into Nile’s moments of struggle. At the end, she’s become more accepting of her new role in this new family, but I know there would still be some things tugging on her heart. It’s difficult to say, “I’m just gonna forget about my mom and my brother and all the people I love and go be an immortal warrior.” There might be a love story for her too. It would be interesting see how one builds new relationships under the circumstances. There are a few little Hollywood hotties I have in mind for the part.

Do you hope to play more superheroes? I read that you’re a big fan of X-Men’s Storm.

Growing up, the only two people I knew who could strike people with lightning were Storm and Zeus. I thought it was amazing that this Black woman had the same gift as Zeus, the father of all the gods. She’s so powerful—there’s so much to be explored with a Black woman who holds that type of power but is sometimes put in a position of not tapping into the fullness of it, for fear of what it would mean for a Black woman to have that type of power.

Where do you see yourself in 10 years?

The biggest thing for me is to not get put into any type of box. Hollywood does it with all actors, and Black artists and Black women in particular, because the range of opportunities for us is so small. If I can look back on my career in 10 years and see that I didn’t get boxed into any type of genre or stereotypical expectations of dark-skinned Black actresses, that’s what I’m trying to achieve. That’s what keeps pushing me forward. It’s big part of my decision-making process.

Surf’s Up: ELLE’s July Shopping Guide
<i>Never Have I Ever</i> Season 3: Here’s What We Know So Far
ELLE Beauty is Going LIVE with Verishop
The Stories Behind Hermès’s Stable of Bags
You Can Buy La Mer On Sale At Nordstrom Right Now