Christmas is a mere three months away (or approximately 113 days, holiday hive), and it’s bringing a new yuletide-themed romantic comedy. Kristen Stewart and Mackenzie Davis will play Abby and Harper, a couple navigating the chaos of Christmas with their families, in Happiest Season, People reports. “A young woman (Stewart) with a plan to propose to her girlfriend (Davis) while at her family’s annual holiday party discovers her partner hasn’t yet come out to her conservative parents,” a description of the film reads.

The film is one of the rare LGBTQ+ entries into the Christmas rom-com pantheon. “I think I’ve wished to see a gay Christmas rom-com my whole life,” Stewart told People. “I’m so happy and proud of Clea for bringing this into the world.” She’s referring to actress Clea DuVall (But I’m a Cheerleader, Veep) who co-wrote and made her directorial debut on the feature. “I’m a huge fan of Christmas movies, but I had never seen my story represented,” DuVall told the outlet. “Happiest Season felt like a great opportunity to tell a universal story from a new perspective.” The movie co-stars Mary Steenburgen, Victor Garber, Alison Brie, Aubrey Plaza, Schitt’s Creek‘s Dan Levy, and the film’s co-writer, Mary Holland. 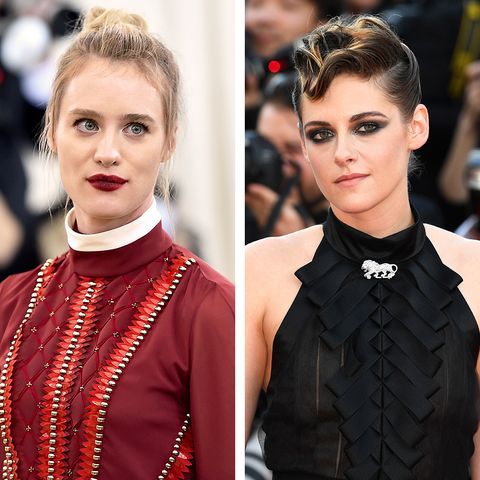 Although Netflix, Hallmark, and Lifetime churn out countless Christmas love stories each year, the genre is often dominated by white, heterosexual, cisgender storylines. Last month, TVLine reported that Lifetime would produce The Christmas Set-Up, their first Christmas rom-com featuring two male romantic leads. Just last year, the channel aired its first same-sex kiss between sideline characters in Twinkle All the Way. Over on Hallmark, a same-sex wedding was shown in a film for the first time after the company controversially pulled a series of ads featuring two women kissing during their nuptials. The CEO issued an apology soon after.

Stewart said that no matter how you define your sexuality, family stress during the holidays is a universal experience. “I love when a holiday movie makes you long for an idea of home, but also examines how hilarious and hard reality at home can be sometimes,” she told People.

Happiest Season will be released on November 25.