Lady Gaga dropped a stunning post on Instagram teasing her upcoming film House of Gucci. She and Adam Driver star as Italian couple Patrizia Reggiani and Maurizio Gucci. Gucci was the grandson of the founder of the Gucci fashion house, Guccio Gucci. Reggiani was convicted of orchestrating her husband’s murder in 1998.

Gaga shared a photo of herself and Driver in costume as the infamous couple, captioning the post, “Signore e Signora Gucci #HouseOfGucci.”

Gaga and Driver are decked out in full costume and makeup, teasing the world of the Ridley Scott biopic. Gaga wears a chic black button-up shirt paired with flashy jewelry and a furry white hat. Driver pairs a cream cable-knit turtleneck sweater with a ski jumper tied around his hips and Gucci’s signature aviator glasses.

House of Gucci is Gaga’s first major film since her award-winning performance in A Star Is Born. Driver returns to the screen following a hiatus in 2020 and four major back-to-back performances in 2019: The Report, The Dead Don’t Die, Marriage Story (for which he was nominated for an Oscar), and Star Wars: The Rise of Skywalker. 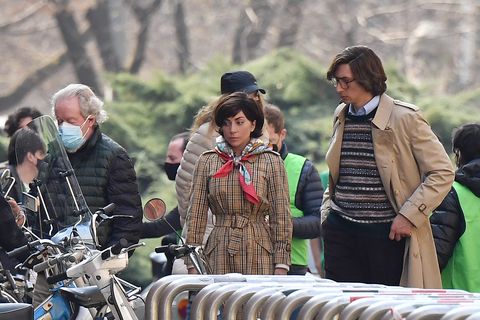 House of Gucci is based on the book House of Gucci: A Sensational Story of Murder, Madness, Glamour, and Greed written by Sara G. Forden. The movie is set for release in theaters on November 24.