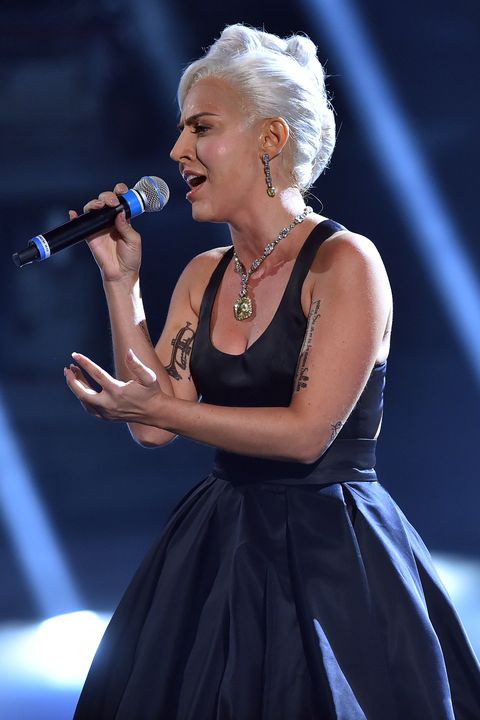 Lady Gaga rang in 2020 in Las Vegas, where she performed her show “Jazz & Piano” at Park Theater. Per TMZ, she took off after her performance on the strip to NoMad Restaurant at Brian Newman’s “After Dark” show, where she sang “Fly Me to the Moon” and danced with Newman’s wife, Angie Pontani.

After that, Gaga had other own social priorities, which TMZ said included getting cozy with a “dark-haired, bearded dude named Michael.” The site didn’t know anything else about this mysterious, bearded Michael but was sure to say that he “wasn’t Bradley Cooper.”

The speculation about Cooper and Gaga began after their performance of “Shallow” at last year’s Oscars. The two got pretty steamy onstage as they sang the famous song from their 2018 film A Star is Born, which prompted fans to wonder if something else was really going on.

In ELLE‘s December issue, Gaga told Oprah Winfrey the story behind that romantic show. The chemistry wasn’t exactly fake, but it also didn’t mean that she and Cooper were together.

“Quite frankly, I think the press is very silly,” she said of the rumors that had persisted in tabloids. “I mean, we made a love story. For me, as a performer and as an actress, of course we wanted people to believe that we were in love. And we wanted people to feel that love at the Oscars. We wanted it to go right through the lens of that camera and to every television that it was being watched on. And we worked hard on it, we worked for days. We mapped the whole thing out—it was orchestrated as a performance.”

Hilary Weaver
Hilary Weaver is a freelance writer based in New York who writes about politics, queer issues, Meryl Streep, Glenn Close, and every woman the Queen has ever made a dame.
This article was originally published by Elle.com. Read the original article here.
[dp_demo_ad_fullx90_2]

Ryan Reynolds Thanks Blake Lively for Being ‘the Heart and Soul’ of Their Family
Lizzo Feels Most Beautiful When She’s Naked
Liya Kebede Continues Lemlem’s Sustainability Mission With H&M
All About Aubrey Plaza’s Husband, Jeff Baena
Maternal Wisdom From Maria Grazia Chiuri, the Missonis, And More