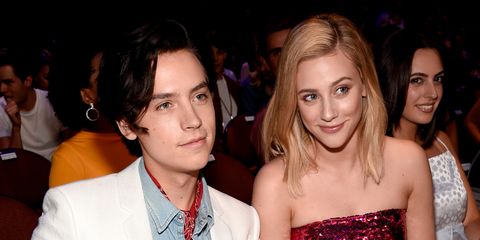 Riverdale‘s Lili Reinhart and Cole Sprouse are fine and good and together. But Reinhart and her co-star KJ Apa decided to have a little fun on Instagram yesterday to point out how absurd fan speculation can be based off photos. Their co-star Cami Mendes posted a pic of herself, Sprouse, and some friends on a yacht. Reinhart wasn’t there:

Apa started his and Reinhart’s teasing, commenting, “Omg.. Coles [sic] not sitting next to lili…”

Then Reinhart responded, “they must’ve broken up.”

Reinhart’s TV mom Mädchen Amick then chided them both. “Oh stop trying to break the internet.”

For those vaguely worried, Sprouse has liked Reinhart’s last two Instagrams, one of which is a couple photo of them in Paris. They’re fine.