In the finale of Outer Banks, the soapy teen drama occupying a near-constant spot on Netflix’s Top 10 list, our heroine Sarah (Madelyn Cline) is off-kilter. Both her geographical location and emotional state turn upside down when she decides to flee her life for an unknowable future with John B (Chase Stokes). Cline has found herself in similar limbo since the April debut of her hit show. 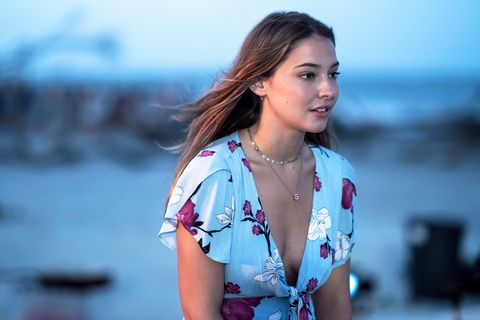 Cline as Sarah in Outer Banks.

How does one grasp that millions of people are spending their quarantine bingeing a “love letter” to your hometown? You don’t. “It’s one of those things you read about, or you hear about, but you never really expect to experience for yourself,” Cline tells ELLE.com from home, where she’s quarantining on and off with her cast mates, including co-star-turned-boyfriend Chase Stokes. Ahead, the actress (tries to) reflect on learning that the Biebers are watching Outer Banks, how Sarah might “match John B’s crazy” in season 2, and what those One Tree Hill comparisons mean to her.

What’s it like to watch the explosion of Outer Banks at a time when you’re distanced from it all?

It’s a strange climate for all of us. For the show, there’s nothing really tangible right now. The only gauge we have is social media. It feels as real as it can be when you’re watching it all grow on a phone screen.

What’s the most surprising part of it all?

People loving it so much has been the most surprising and exciting thing. We all loved the show and believed in it so much. We knew we had something special because the show is a passion project for everyone involved. But you never know how people are going to receive it, so that was the big question mark. It’s surprising when you go for grocery runs or get a text from the cast members like, “I just went to a grocery store and I was recognized with a mask or a hat on.” 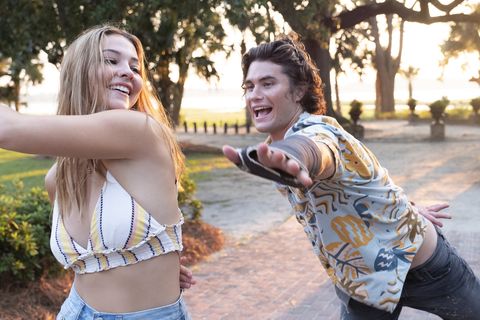 Cline with co-star Chase Stokes on the set of Outer Banks.

Have you heard from any celebs watching the show?

I found out recently that Hailey Bieber is watching the show. If she’s watching, I’m sure Justin is as well, which is crazy. Lucy Hale has been watching. Amanda Seyfried reached out on Instagram and said something, which, I lost my mind. I think Cody Ko also. Chase [Stokes] tweeted him, and Cody Ko went on TikTok and made a video about how he’s going to start watching, which is hilarious.

What was it about the script that drew you to Outer Banks?

The logline was, “Four friends on a treasure hunt.” I read that like, “It feels a little corny.” Then Chase Stokes thought it was a remake of The Goonies. We were all like, “Are we too old for a treasure hunt?” Then [we] ended up reading the script and I was like, “This is really amazing.” The pilot is such a page turner. I made it to the last page and I was like, “I need more. I want to read the second episode.” I really think we’ve mastered the cliffhanger on this show. 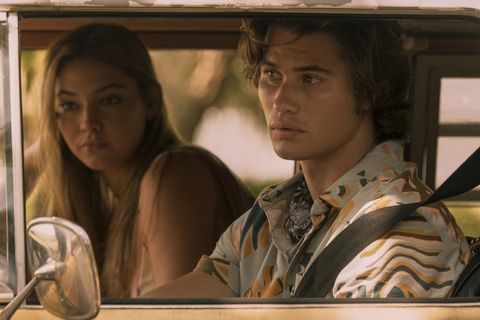 Cline as Sarah and Stokes as John B.

You grew up in South Carolina, the area where the show is filmed. Were you able to offer your own experiences from growing up there?

When I first heard we were filming in Charleston, I was like, “I don’t know if I want to go home.” Because when I left Charleston, I ran for the hills. So I was like, “I would like to shoot somewhere else, but I’m excited—it’ll be cool when I get to see my family and hopefully book a cool job.” Then the love for the project made me fall back in love with Charleston. I was so in love with the story and I fell in love with the environment and the surroundings. The show was like a little love letter to my upbringing. My performance in it was my love letter to Charleston. I got to take the cast around to all the places I knew, my old haunts and the good restaurants. It was cool to play tour guide and show them where I grew up.

Outer Banks has been compared to teen dramas like The O.C. or One Tree Hill. Were you a fan of those shows?

I have actually never seen The O.C. all the way through. I have seen a bit of One Tree Hill—that’s a classic. I did revisit some Dawson’s Creek. Those are such classic shows that you say them and everybody knows what you’re talking about—the characters, the storylines, the love stories. When you’re being compared to such iconic shows and characters, it’s a little intimidating because you don’t want to let anyone down and you want to do those comparisons justice. Something in our favor is that everybody on our crew and in our cast are big fans of those shows. This show is their homage to shows like that and shows shot in the Southeast. I’m really proud of those comparisons.

In the finale, Sarah is in a totally different place geographically and emotionally from where she is at the beginning of the season. What was your reaction to her decision to run away with John B?

I was really excited when I first found out, because for a while, there was a big question as to whether or not Sarah was going to go with John B. Our writers were going back and forth, toying with the idea: Is Sarah her father’s daughter? Does she stick with her family and go to the very end with them? Or does she risk everything and go with John B?

I talked to our writers when I found out that was the question. There is a line in episode 7 where John B says to Sarah, “You’re all I have left.” I went to Shannon Burke, one of our amazing writers, and I told him, “At this point, after everything that’s gone down, John B is all Sarah has left. Why would she go back to her family when her world has crumbled around her?” We decided she would absolutely risk everything and get on the boat with John B, which solidifies that forbidden love story, that Romeo and Juliet-type love between them.

A second season hasn’t been confirmed yet, but have you had conversations about what could happen in season 2?

I can’t wait to see where the story goes when John B and Sarah get to the Bahamas. My wish is that we continue to see Sarah come into her own and grow into this badass. I want her to match John B’s crazy—like a Bonnie and Clyde-type dynamic between them. That sounds like a lot of fun to play as an actor. As far as Sarah goes, I want to see her grow into her own person, and not be under the influence or control of her dad.

This interview has been edited and condensed for clarity.