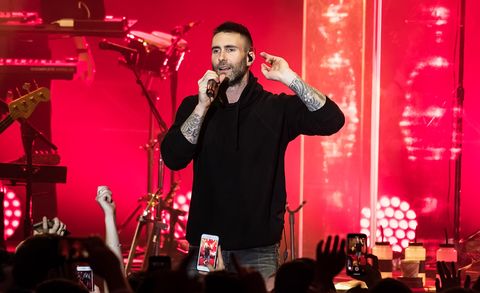 Everyone knows the creme de la creme of the annual Super Bowl game is really the halftime show, featuring music’s most recognizable faces. Past Super Bowl halftime alum include Lady Gaga, Katy Perry, Coldplay (which was really Beyonce and Bruno Mars’ set, if we’re being honest). This year, Maroon 5 is taking center stage when the Super Bowl touches down in Atlanta, but according to Us Weekly, the beloved boy band is having some trouble landing guests to join its halftime set.

A source told the outlet that “no one wants to associate themselves with the NFL,” and it has a lot to do with former 49ers quarterback Colin Kaepernick’s protect against police brutality. The current free agent launched his protest in 2016 when he kneeled during the National Anthem. Almost two seasons later, Kaepernick has yet to return to the field, but has gained support from a slew of notable celebrities and musicians.

Maroon 5 reportedly tried to nab Cardi B for the guest slot, but “she’s been going back and forth” and as far as they’re concerned, “it’s a no right now.” Cardi B was one of Kaepernick’s most vocal supporters and gave the former football star a shout-out during the 2017 MTV VMAs. “Colin Kaepernick, as long as you kneel with us, we’re gonna be standing for you, baby. That’s right, I said it,” she announced, before introducing Demi Lovato. Earlier this year, TMZ asked the rapper when she’ll hit the Super Bowl halftime stage, to which she responded, “when they hire Colin Kaepernick back.”