On Sunday, June 21 at 9 p.m., HBO subscribers met an old friend of mine: Perry Mason. He’s not the Perry I remember, reliable and even-keeled; the Perry viewers met on Sunday night is a private detective with PTSD from World War I and a drinking problem, lean bordering on scrawny, his hangdog face speckled with stubble. And though it’s hard to learn that someone you love has changed, this new Perry is far better suited to the America of 2020 than my old friend ever was.

HBO’s new Perry Mason series is a clever, stylish reboot of a franchise few under the age of retirement remember. The original, a series of 83 pulp detective novels by Erle Stanley Gardner (yes, he wrote them all himself), is the third-bestselling book series of all time. In these, and in the 1957 TV show starring Raymond Burr, Perry Mason is a Los Angeles criminal-defense lawyer who will stop at nothing—not even the law—to bring justice to his clients. They are nearly always falsely accused, of course, and nearly always of murder, but the truth invariably prevails by the end of each book and/or episode. You may have heard of something called the “Perry Mason moment,” so named because that’s how a lot of Perry’s cases go: At trial, a witness on the stand breaks down under Perry’s questioning and confesses their own guilt—or at least reveals a key piece of information that dooms the prosecution’s case.

As is the fashion with reboots of late, the new Perry Mason breaks that mold in favor of a dark-and-gritty riff on the character. Set in 1931, the HBO series is functionally a prequel to the original franchise: Perry (Matthew Rhys) is a down-and-out PI living on his dead parents’ defunct farm just outside of Los Angeles when an old family friend, criminal-defense lawyer E.B. Jonathan (John Lithgow), hires him to investigate a case. The Lindbergh-esque kidnapping and murder of a baby named Charlie Dodson quickly snowballs into “Trial of the Century” proportions—especially when Charlie’s mother Emily Dodson (Gayle Rankin) is arrested for the crime, and evangelical celebrity preacher Sister Alice (Tatiana Maslany) takes it upon herself to champion Emily’s cause. 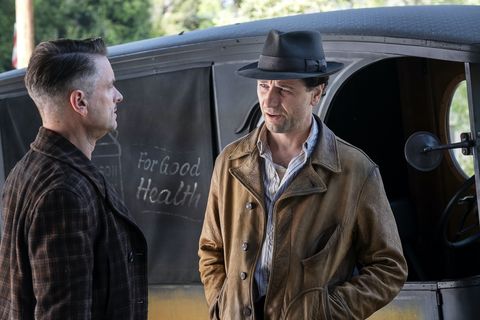 Though I’m sure no one at HBO predicted that June of 2020 would see us riding out a global pandemic, mass unemployment, and the biggest civil uprising against state violence in the new millenium, Perry Mason couldn’t have come at a better time—even if most people don’t know the franchise well enough to understand why. As police violence against Black people triggers a Hollywood reckoning about the future of cops on TV, in comes a detective show about a protagonist whose greatest enemy is police corruption. From the start of the original book series, Perry Mason and the LAPD are at best begrudging allies, and even this is rare; more often, the cops are actively trying to thwart Perry, conspiring to railroad his clients and even get Mason himself disbarred for his unconventional lawyering style. Despite winning every case the franchise throws at them, Perry and his crew—secretary Della Street and private detective Paul Drake, both of whom figure prominently into the new series—are perpetual underdogs, locked out of a state system that is inept at best and actively dangerous at worst. 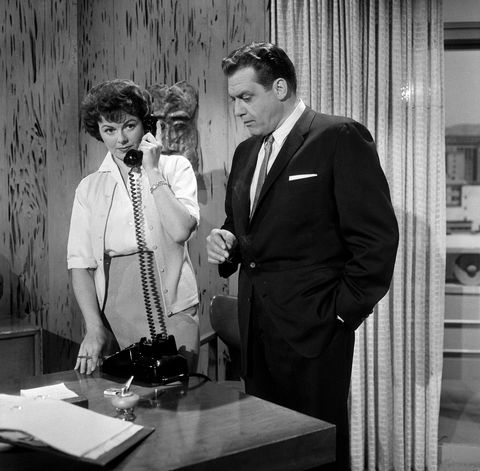 Barbara Hale and Raymond Burr in the CBS series Perry Mason, which ran from 1957 to 1966.

To be clear: the original iteration of the Perry Mason series wasn’t, at the time, trying to make a political statement. If anything, the books are dated and traditionalist: all the main characters are white; the women are mostly either saints or sluts; two or three of the 40-some installments I’ve read thus far contain racial slurs. Gardner was a former lawyer who believed in the capacity of the legal system to find justice for the downtrodden, and he frequently dedicated books to legal professionals and criminologists who had made significant contributions to the field of criminal defense. Even so, he wasn’t trying to be a hero—he just wanted to honor his old profession while showing readers in the ‘30s, ‘40s, and ‘50s a good time.

Speaking personally, I can vouch for Gardner’s success on the “good time” front. When I read my first Perry Mason, I was a teenager who had stumbled upon a discarded copy of The Case of the Troubled Trustee in the locker room at my grandparents’ gym. I’m pretty sure I was depressed, if only because I’ve been depressed since puberty, and the book was an immediate comfort, pairing the thrill of a good crime novel with the succor of a happy ending. After that, I would drift to the mystery sections of used bookshops and hunt for other books bearing the author’s name, building a collection over time that is still one of my most cherished possessions. When my girlfriend and I started dating, the first gift she gave me was a complete box set of the original Perry Mason TV show, and I was so happy I wept. Three years ago, we adopted a cat off the street and named him Perry Mason.

When I heard that HBO had optioned the series for a reboot, my feelings met at the intersection of delight and anger. I thrilled at the thought of more adventures with my favorite character, but the last thing I wanted was my offbeat comfort object to become a mainstream staple. I didn’t want to battle prestige TV snobs at the bookstore over the last battered copy of The Case of the Fan-Dancer’s Horse. And—if I’m being honest—I’m a writer: I’d always hoped that if anyone was going to re-introduce the world to Perry Mason, if anyone was going to write a new book or movie or TV show, it would be me.

“When you’re a fan of something, it’s a deeply emotional experience to see someone do justice to the thing that has meant so much to you.”

So when I sat down to watch the new series, a small but strident part of me was rooting for its failure. Maybe the update would be awful, or maybe it would be an adequate show that was nevertheless a total bastardization of the series, and I could indulge in some righteous fangirl outrage while clinging to my sentimentality. After all, “dark and gritty” has no place in a franchise whose defining feature is that everything turns out for the best in the end. Right? When I first met the dramatically different Perry of HBO’s series, part of me thrilled at the validation of knowing they’d gotten it all wrong.

But as I kept watching, I realized it wasn’t wrong at all. Over the course of the season, I watched this new, frayed-around-the-edges Perry discover that he still had it in him to care about something bigger than himself. I watched as he learned to channel his rage and frustration into an opportunity to bring a little bit of justice to the world. And—minor spoiler alert for the rest of this paragraph—halfway through the season, when Perry passed the bar and received his license to practice law, I had to pause the episode because I was crying too hard to hear what the characters were saying. 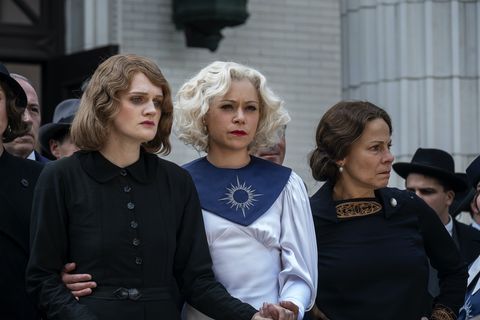 In its own way, the new Perry Mason is as dedicated to justice as the original books. But the show reflects our 21st-century notions of that ideal: Perry’s secretary, Della (Juliet Rylance), is a queer woman and the real architect of Emily Dodson’s defense; Perry’s go-to detective, Paul Drake (Chris Chalk), is a Black cop who must stare down the barrel of a racist, morally bankrupt LAPD and determine whether that’s a legacy he wants to uphold. Sister Alice, a clear fictionalization of the real-life O.G. televangelist Aimee Semple McPherson, is a brand-new character who enables the show to weave questions of faith and fraud into its pursuit of the truth. The Los Angeles of HBO’s Perry Mason is a city steeped in corruption and decay, a place where the bad guys escape true accountability while the good guys endure failure after failure. Yet it is the most hopeful, encouraging piece of media I have seen in a long time. It’s a show about bringing a little bit of light to the darkness—perhaps not enough to illuminate the entire night, but enough to take the next step forward, and the next, and the next after that.

When you’re a fan of something, it’s a deeply emotional experience to see someone do justice to the thing that has meant so much to you. It’s a feeling of satisfaction, release, and deep gratitude. But it’s also something very bittersweet: All of a sudden, you have to share these characters—and your intimate relationship to them—with the rest of the world. Now that Perry Mason is on HBO, Perry isn’t just mine anymore. I have to learn to let him belong to everyone. And I’ll be the first to admit I don’t want to share him—but the truth is that this Perry is supposed to be shared. He’s a role model for our time: special not for his ability to do good, but because of his capacity and desire to do better. Perry Mason probably won’t change the world, and it may not even change the future of TV—but it’s the kind of detective show we’re ready for in 2020, and it’s the one we deserve.