Major spoilers for Pieces of a Woman below.

Director Kornél Mundruczó’s drama, Pieces of a Woman, has all the ingredients for a remarkable film in its unrelenting look at a wife (Vanessa Kirby) reeling from the death of her baby just minutes after birth. But as much as the film puts the agony of a woman’s experience into razor-sharp focus—including an excruciating, 23-minute labor scene that makes her ensuing grief even more palpable—it fails to live up to the promise of own title, neglecting to peel back the layers of what could otherwise be a compelling female character.

That’s certainly not due to Kirby’s performance. She elevates Martha, a woman whose backstory and thoughts are virtually muted, into a recognizable human in ways Kata Wéber’s screenplay does not. Though Mundruczó and Wéber, who are married in real life and were inspired by their own trauma, deserve praise for delving into a complicated and still-taboo topic, they neglect to give Martha agency in her own story. She’s reduced to a reflection of how others see her: “cold.”

It doesn’t help that Pieces of a Woman spends no time getting to know Martha in the precious few minutes of the film that precede her labor. When we meet her, she’s making her way out of her office baby shower just before maternity leave. With little dialogue and Kirby’s subtle portrayal, it’s hard to tell if she’s excited, nervous, or miserable. We don’t even know what kind of job she does. These are all tiny details that can add color to a character and provide context about who she was before the tragedy.

In contrast, Martha’s blue-collar husband, Sean (Shia LeBeouf), gets a robust introduction. The film opens with him exchanging jokes with colleagues at a construction site. Within seconds, we learn his occupation, his wife’s name, that he has a daughter on the way, and that he’s unquestionably eager for impending fatherhood. In a scene where he meets Martha and her well-to-do mother, Elizabeth (Ellen Burstyn), at a dealership where the latter co-signs for the couple’s new car, it’s made clear he doesn’t get along with his mother-in-law. Sean even goes as far as to tell Martha that her mother “wants to emasculate” him by purchasing a car he can afford. Meanwhile, we get nothing about the state of Martha and Elizabeth’s relationship—or Martha’s mindset, for that matter. 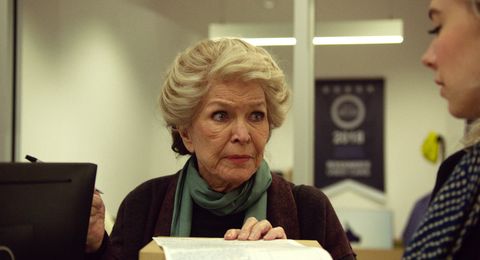 That is just the tip of the iceberg when it comes to Sean, whose storyline achingly unfolds through LaBeouf’s vulnerable performance. But these opening sequences at least give us a sense of who he is before the pivotal scene. It’s frustrating that Martha, the female protagonist, doesn’t get the same treatment. It’s even more glaring when she melts into her grief and withdraws following the baby’s death. The filmmakers decide to have the rest of the characters wrestle with how they think she feels, whether to blame the midwife, Eva (Molly Parker), or Martha’s decision to donate her baby’s body to medical research, instead of just asking her.

The result ices Martha out of her own story. She quietly seethes as we watch her, primarily through her family’s eyes, become an abstract figure who emotionally fades into the distance. The only time we ever hear her is when she objects to something someone else wants to do—sex with her husband, burying their dead baby, or taking the midwife to trial for the sake of “justice,” as Elizabeth says. We rarely get insight into Martha’s own journey until toward the end of the film. She’s mostly an enigma.

While that’s partly because she’s curiously drawn through other characters’ perspectives, it could also be due to the fact that, as personal as this story is to Wéber, she told The Hollywood Reporter that it’s “highly fictionalized.” She draws from the experiences of a variety of women who’ve dealt with losing a child, not just her own first-hand account, to build a narrative that is “about women and motherhood.” But that amalgamation forms a nebulous, somewhat contrived female character with marginal identity. And with nary a friend or other confidante to whom she can express herself, we don’t even get a sense of what motherhood means to her.

That puts a lot of weight on Kirby’s performance, as volcanic as it is internal, to drive Wéber’s themes home as the film bubbles toward a conclusion. While a spat between Martha and Elizabeth finally articulates the root of their mounting tension, it only scantily reflects on how their relationship—including Elizabeth’s own trauma—exacerbated Martha’s grieving process. It’s only at the end, when Martha is in a courtroom facing a teary-eyed Eva, that she’s forced to reckon with those few moments of her daughter’s life and the bonds of maternity that are never really broken. At last, we get her point of view.

As necessary as that is, it’s bittersweet that it comes in the film’s final moments, simultaneously intertwined with questions of retribution and justice that could’ve been omitted to better serve a fuller portrait of womanhood and motherhood as it was intended. As it is, Pieces of a Woman is a rather blunted depiction of an endlessly complex subject that deserves much more contemplation. Despite impressive performances, it fails to truly hit that mark.

Coach’s New Collab with Jennifer Lopez Is “Wearable, and a Little Bit Glamorous”
How To Livestream Alexander McQueen’s Spring-Summer 2022 Show
Selena Gomez Offers An Exclusive First Look at Sephora’s Anti-Bullying Campaign
Milla Jovovich Poses With Doppelgänger Daughter to Show Off Haircuts
Adele’s ‘Easy on Me’ Lyrics Are Even More Emotional Than We Expected