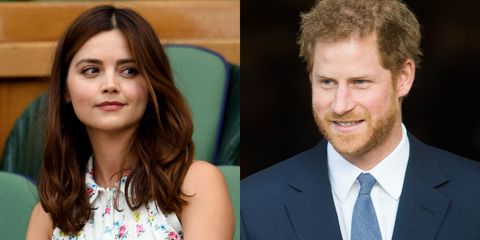 During Prince Harry and Meghan Markle’s secret Amsterdam trip last weekend, the two celebrated the opening of Soho House’s new location with several celebrities, among them a rumored ex of Prince Harry’s, actress Jenna Coleman. And apparently, Vanity Fair‘s royal correspondent Katie Nicholl is reporting, Harry had an awkward run-in with Coleman during a breakfast.

“Harry had to walk straight past Jenna to get to his and Meghan’s table,” a witness told Nicholl. “It was pretty awkward and some of the other guests were commenting on it. Jenna looked down while Harry looked straight ahead, while Meghan didn’t seem to notice. She sat through breakfast with a smile on her face, but Harry looked a bit uncomfortable. He’d been super friendly saying hi to everyone, but he didn’t even acknowledge Jenna.”

Harry was rumored to be casually seeing and “wooing” Coleman in June 2015. “They’ll never be anything serious because of their schedules,” a source explained to Us Weekly at the time, regarding Coleman and Harry’s relationship. “He’s off to South Africa and she’s going to be filming Doctor Who in the States. But for now, they’re just enjoying each other’s company.”

Harry would go on to meet Meghan in summer 2016.