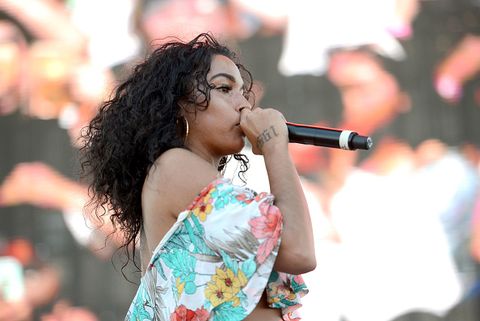 Not everyone appears to be enjoying Ariana Grande’s newest song, “7 Rings.”

Princess Nokia, a New York City-based rapper and songwriter, took to Instagram the afternoon following the song’s release to let her followers know that she isn’t a fan of the track. The musician, whose given name is Destiny Frasqueri, pointed out some striking lyrical similarities between Ariana’s newest single and her song “Mine,” a track from her 2017 debut album, 1992.

In the video, Frasqueri first plays Ariana’s track before playing her own song.

“Does that sound familiar to you? Because that sounds really familiar to me,” Frasqueri says sarcastically into the camera. “Ain’t that the little song I made about brown women and their hair? Hmm. Sounds about white.” (Yikes.)

“Mine” celebrates the hair traditions of women of color and touches upon the insensitive treatment of their hair that they often receive from non-minority groups. “7 Rings,” on the other hand, is a rich girl anthem with an underlying message about friendship, in which Grande mostly talks about having the luxury of buying what she wants, when she wants it, sometimes for her friends, too.

Fans of Nokia urged the rapper to take legal action in the comments section of her Instagram post.

Listen to “Mine” and “7 Rings” below to make the comparison for yourself.