At 89 years old, Rita Moreno‘s had more than enough time to realize she’s a national treasure, but during ELLE‘s Women in Hollywood event in Los Angeles, she nevertheless nailed a cheeky response to a tribute from Kerry Washington.

After Washington moved Moreno to tears by remembering how “like Rita, I was a little girl from the Bronx with a dream and a song and a desire in my heart to create magic,” the Scandal actress referred to Moreno as “our Lady Liberty.” Moments later, Moreno—dressed in a cinched-waist black and white suit by Ralph Lauren—wiped at her eyes and quipped, “I’m so moved…at what a wonderful person I am.”

She later turned to Washington, doubled-over laughing on the side of the stage, and told her, “Before I even start, you really look fucking gorgeous. How dare you. Yeah, even your ass is cute.” 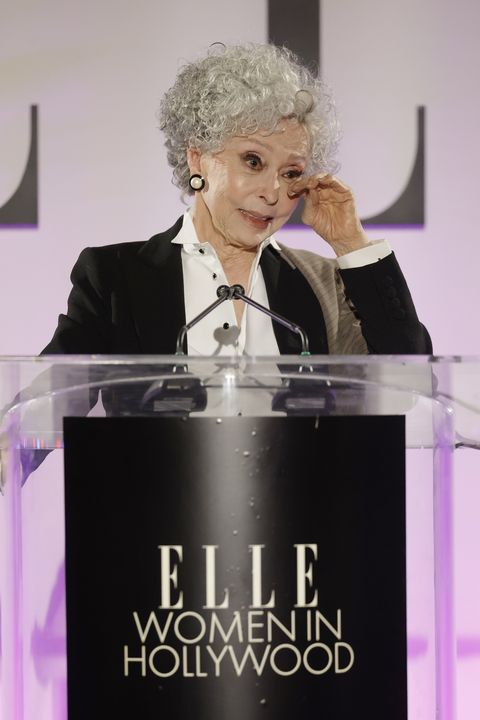 After the audience had settled down, Moreno turned her thoughts toward the past, when Hollywood looked—and felt—considerably different than it does today. “It’s astonishing—I mean, who knew that you can be in two places at the same time?” she said. “Tonight my body is right here on top of this monument to film, but my memory is down the street, right down there at street level…back when this building was the flagship May Company department store. I was there.”

She described her early years trying to carve out a niche in a cut-throat industry, one especially unkind to women who look like her. “The way my career was going, I had lots of free time, and I would come in here—the May Company—and imagine myself in the latest fashions of somebody special, and then I would visit my favorite perfumer,” the Puerto Rico-born actress said. “That was 1957. I was only 17.”

To further enchant the crowd, she sang a few crystal-clear notes from “Dream (When You’re Feeling Blue)” by Frank Sinatra: “Dream, when you’re feeling blue/Dream, that’s the thing to do/Just watch the smoke rings rise in the air/You’ll find your share of memories there.”

She finally sealed her message with a poetic piece of wisdom. “Dreams don’t fade. That’s why they are called dreams,” she said. “My career did not jump on an express elevator right here all the way to the top. Along the way, I have explored luggage, the kids department—and believe me, it has been stuck in the basement…way more than once. But what a ride.”

In Moreno’s cover interview for ELLE, she explained how it has taken her decades to earn the confidence she now exudes. “Self-respect is one of the most difficult things to achieve when you’ve lived without it for years, as I did,” she said. “Standing up for causes may not have been the safest thing for my career, but that’s when my conscience came into play. I decided a long time ago we have to help people when we can and if we’re able to.”

Anne Hathaway Stunned in a Chic LBD and Knee-High Boots on a Date With Husband Adam Shulman
Billie Eilish Shows Off Brunette Hair In Burgundy Coat On the Hitmakers Brunch Pink Carpet
Chase Stokes and Madelyn Cline Are Seeing If They Can Reconcile
Paris Hilton Congratulated Lindsay Lohan On Her Engagement Despite ‘Past Differences’
ELLE Escapes: Art Basel