Last month, the Supreme Court announced that it will take up Dobbs v. Jackson Women’s Health, the most significant challenge to Roe v. Wade in nearly five decades—and the most direct threat to abortion since the decision itself. The deeply personal and private choice of whether or not a person can seek and access abortion care is at risk, and it all comes down to the six men and three women currently sitting on the Court.

Here’s how we got to this critical moment: In 2018, Mississippi—which has just one clinic left where people can access safe, legal abortion—outlawed abortion after 15 weeks of pregnancy. Just hours later, a federal judge rightly blocked the law, and two federal courts have since held that the ban violates nearly 50 years of Supreme Court precedent. Why? Because since Roe, every other court has issued the same decision: States cannot prohibit a person from making the decision to have an abortion prior to viability. It has been upheld by Supreme Court justices appointed by both Democrats and Republicans. But now, in an alarming decision, the Supreme Court has decided to review the 2018 Mississippi law, throwing that precedent into serious doubt. If the Mississippi law stands, Roe will not.

That flies in the face of a significant majority of Americans who want Roe to remain the law of the land. It’s the product of a decades-long campaign by anti-abortion extremists who want to overturn the Court’s precedent. They created litmus tests for political candidates running to ensure that their extreme views would be overrepresented in Congress and state legislatures. They worked hand-in-glove with Mitch McConnell to pack the courts with extreme judges, many of whom have records of opposing Roe. And they have slowly and methodically passed legislation to push the limits of the Court’s precedent and ultimately help outlaw abortion nationwide. Now the Supreme Court is giving this extreme minority their chance to do just that. 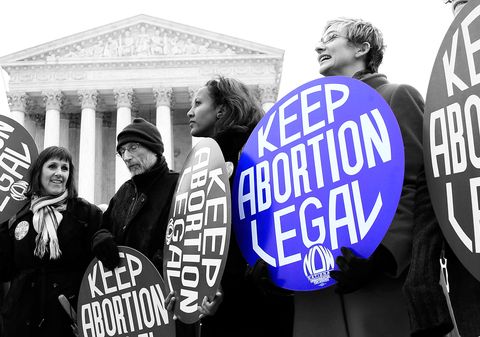 But what would our country look like without Roe? First, and most immediately, abortion opponents will be able to gut access to reproductive health care right away. Abortion will likely be outlawed in 24 states, including 11 where existing laws could automatically trigger abortion bans—no discussion required. That means 41 percent of women of childbearing age would see the nearest abortion clinic close. The average distance these women live from a local clinic would jump from 35 miles now to 279 miles.

Anyone who has ever worked a low-wage job knows that traveling hundreds of miles for health care isn’t an option. Instead, millions will be forced to forgo important, lifesaving care or seek dangerous, unsafe health care. And it’s especially painful because they had little say in the matter.

That’s because women, and especially women of color, are vastly underrepresented in rooms where these decisions are being made. Before I was elected to the Senate, there had never been a Latina senator. Justice Sonia Sotomayor is the only woman of color on the Supreme Court and one of just three women. And in states like Texas, which just passed a new law targeting abortion rights, women hold just 27 percent of the legislative seats. That’s not right.

To protect access to abortion, we must first acknowledge that Roe is the floor, not the ceiling. In dozens of states, people seeking abortion care already face barriers, including multi-day waiting periods and requirements to make multiple in-person trips to a clinic. None of these restrictions improve the safety or quality of abortion care. But they do cut off access to reproductive care.

Congress must pass the Women’s Health Protection Act, a bill I have championed since I was elected to the Senate, to establish a statutory right to access abortion. And states can do what we’ve done in Nevada. We’ve enshrined the right to access abortion in state law, and in 2019, we lifted restrictions on accessing reproductive care, rather than adding more.

It’s frightening and should enrage the majority of Americans who believe in the freedom to make their own health care decisions.

If anti-abortion extremists succeed in convincing the Supreme Court to overturn or gut Roe, it will have a profound impact on the wellbeing and economic stability of countless people. It’s frightening and should enrage the majority of Americans who believe in the freedom to make their own health care decisions.

Many people in this country today have never lived without access to a full range of health care services, because Roe has been the law of the land for nearly 50 years. But that’s exactly what the Supreme Court will be deciding in this case—whether a person can continue to make their own health care choices. Every American needs to realize that this is the moment so many of us have feared for so long. The stakes have never been higher.