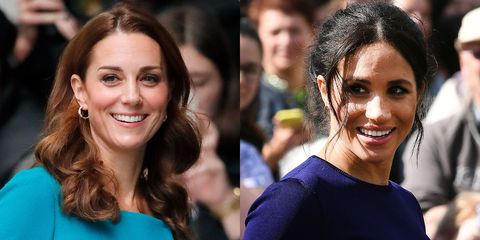 Kate Middleton and Meghan Markle’s week of semi-private events continued last night at the Royal Foundation’s fall dinner at Victoria House. No photos were shared by Kensington Palace’s Twitter or Instagram, but the evening’s performer Tom Walker shared shots of Kate, Meghan, and their husbands Prince William and Prince Harry. The Duchess of Cambridge chose a stunning red gown to wear for the fancy dinner while the Duchess of Sussex wore a strapless black gown. Kate wore her hair down while Meghan appeared to have hers up. Both looked very elegant:

Kate’s dress, by the way, appears to be the red Preen dress she first wore in 2016 on her royal tour of Canada:

The fall dinner came after both Meghan and Kate spent the afternoon at BBC events. Kate rewore a teal Emilia Wickstead dress to her visit with William to BBC Broadcasting House in London. Meghan and Harry’s event at BBC Studioworks has still been kept private, meanwhile, so no photos have been released yet of the Duke and Duchess of Sussex there.

The dinner wasn’t Kate and Meghan’s only evening event together this week. Both duchesses attended the 70th birthday party that the Queen held for her son and their father-in-law Prince Charles. While no photos were taken of the event inside (again, it was private), photographers did captured the couples in the car on the way over to Buckingham Palace from Kensington Palace.

Kate wore a pink gown with giant jeweled earrings with an updo:

Meghan also opted for giant jeweled earrings with her own updo. No shot of Meghan’s gown from Charles’s birthday party has been published yet.