During the final hours of New York City’s big snowstorm this week, which blanketed the city in over 17.2 inches of snow, Selena Gomez made a bold move: Navigating the city and its scantily plowed sidewalks in heels. The singer was photographed out on Tuesday, carefully walking to lunch with a friend at The Odeon restaurant in TriBeCa. Gomez wore a pair of ripped jeans, a giant pink scarf, cream teddy coat, white gloves, and an orange mask. She carried a black purse, which complemented her black heels. 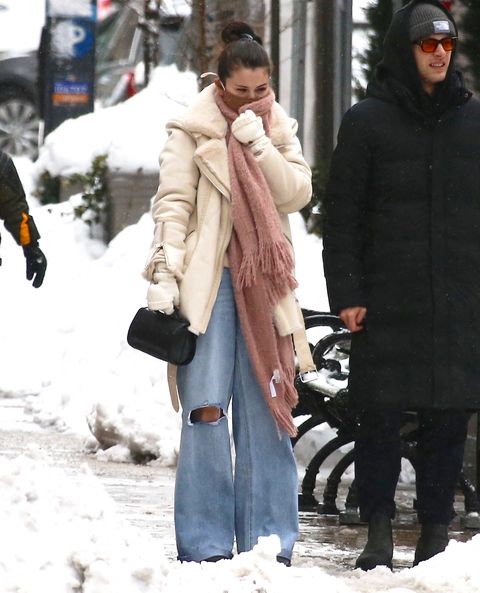 Gomez has been in Manhattan for the past couple weeks, filming her upcoming Hulu comedy Only Murders in the Building. Earlier this week, hair stylist Evanie Frausto posted photos of Gomez in the pastel rainbow wig he created for her on his Instagram Story. In one shot, she appears in a mask (in adherence to New York’s COVID-19 guidelines) and her Louis Vuitton monogram trench. It’s unclear whether the look was for a project or just for fun. (Some celebrities will wear wigs when they go out to help disguise them, so they can have some privacy.)

In addition to Only Murders in the Building, Gomez is on the cusp of releasing her first Spanish EP, REVELACIÓN, on March 12. Gomez spoke to Apple Music’s Zane Lowe last month about how singing in Spanish has been a longtime dream of hers. “This has been something I’ve wanted to do for 10 years, working on a Spanish project, because I’m so, so proud of my heritage, and just genuinely felt like I wanted this to happen,” she said. “And it happened, and I feel like it’s the perfect timing. Just with all the division in the world, there’s something about Latin music that globally just makes people feel things, you know?”

<i>Project Runway</i> Season 19, Episode 2 Recap: Street Smarts
Inside Travis Barker’s Proposal to Kourtney Kardashian—and the First Look at Her Giant Diamond Ring
The Best Designer Finds from the Net-a-Porter Friends and Family Sale
MAC Is Offering a Rare 30% Off Halloween Makeup Essentials
These 24 Celebrity-Approved Clean Beauty Products Are All 20% Off