Another day, another great Selena Gomez street style look in New York City. The actress, who has been shooting the upcoming Hulu comedy series Only Murders in the Building on the Upper West Side of New York City, was photographed out shopping in the city on Monday. Gomez opted to wear a chic winter uniform—a cream turtleneck, high waisted jeans, and boots—with a scene-stealing statement coat, a Louis Vuitton monogram trench. (The jacket appears to retail for $6,000.) She topped the look off with an oatmeal linen Masqd face covering, as the city remains very much under a mask mandate amid the ongoing coronavirus pandemic. 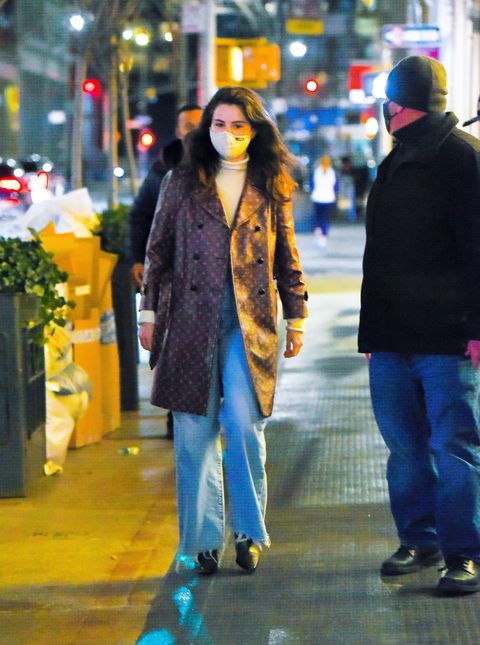 The sighting came just hours before Gomez announced her second Spanish single, “Baila Conmigo” (“Dance With Me” in English) with Rauw Alejandro and Tainy will be coming out this Friday, Jan. 29. Gomez released her first Spanish single, “De Una Vez,” on, Jan. 14.

She spoke to Zane Lowe on Apple Music that week about why she decided to create Spanish music now. “This has been something I’ve wanted to do for 10 years, working on a Spanish project, because I’m so, so proud of my heritage, and just genuinely felt like I wanted this to happen,” she said. “And it happened, and I feel like it’s the perfect timing. Just with all the division in the world, there’s something about Latin music that globally just makes people feel things, you know?”

“You know what’s funny, is I actually think I sing better in Spanish,” she continued. “That was something I discovered. It was a lot of work, and look, you cannot mispronounce anything. It is something that needed to be precise, and needed to be respected by the audience I’m going to release this for. Of course I want everyone to enjoy the music, but I am targeting my fan base. I’m targeting my heritage, and I couldn’t be more excited.”