Spoilers for season 4 episode 4 of The Handmaid’s Tale, “Milk” below.

When Rita (Amanda Brugel) steps off the plane and into Canada at the end of The Handmaid’s Tale season 3, it’s one of the show’s rare moments of relief. Finally, a character who is good and kind—as we slowly but surely come to discover—makes it to safety. But with a two-year stretch before season 4, fans were left wondering: What will Rita do next?

Now, just four episodes into the new season, we come to find it’s a question the former Martha is wrestling with herself. “I think Rita is grateful to be free and in Canada,” Brugel tells ELLE.com. “But I truly believed, or at least I played it like that this season, that she missed Gilead. She misses the routine and the structure and the strange home dynamic that was in the Waterford house. Suddenly she’s in Canada and has no family. She’s by herself and has no purpose every day.” But as Fred (Joseph Fiennes) and Serena Joy (Yvonne Strahovski) attempt to slither back into her life, Rita begins to test the boundaries of her newfound freedom and proves she won’t be easily manipulated.

Ahead, Brugel discusses what it was like to finally stand up to Fred, what she hopes happens to Serena’s child, and how she sees the show slowly starting to tackle race, a subject that’s been called Handmaid’s “greatest failing.”

We need to talk about Rita finally confronting Fred. What did you think when you first read that scene?

I was shocked that she would do this, or that the writers gave me this gold to release upon Fred. But I really wanted to make sure it was handled in a Rita-like fashion. I think a lot of audience members want her to pop off or start screaming, and that’s just not who she is. She asserts herself with strength and gravitas but also grace. In the end, she still betrays Serena and lets Fred know he’s having a baby, but she does it with grace.

There was part of me that thought, I wish she could have cursed him out.

So do I, but that wasn’t in the script, and I think I would have been fired if I just started popping off.

We also need to talk about Rita finding out Serena’s pregnant. Rita seems genuinely excited. What do you think she was wrestling with during and after that scene?

I think she was reminded of her old life, something she was used to, and she fell back into that dynamic. When Serena starts talking about [how] her and Rita had been friends, I think Rita quickly realizes Serena is weaving her web again. For the first time ever, she had the freedom to say, no, thank you. She was drawn in and wanted to see something familiar, but by the end was like, oh no, you’re up to your old tricks, I’m out.

All the time. She’s sort of done that to herself. The character is so quiet and stoic because she’s purposely made choices to not be noticed, to be smaller, to be muted so she doesn’t get in trouble and isn’t on anyone’s radar. I find those people are usually the strongest and usually the survivors because they’re the most cunning. 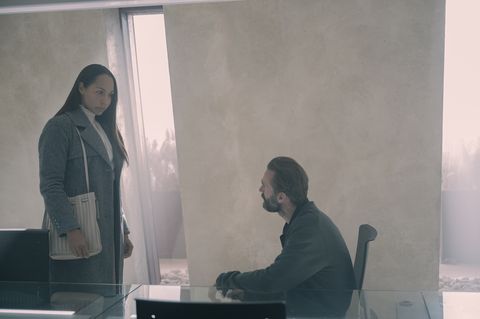 There’s a moment in episode 4 when Rita is talking to Mark Tuello and she mentions that in Gilead she was considered property. But it’s never discussed that Rita was also a woman of color in Gilead who was treated as property. Do you hope the show touches more on that in the future?

Yes, I really hope race is approached or discussed at all in the show. I know it’s difficult because race is not just an episode to tackle. You can’t get it over with in one episode. I think they’ve felt a little apprehensive to start bringing it in now because we haven’t really discussed it, but it doesn’t mean that it can’t be discussed. It doesn’t mean it shouldn’t be discussed. Especially now, I feel it’s really important to have more writers of color in the writers’ room, so I hope we go forward with that next season.

Did you have a similar reaction reading that line? That this was Handmaid’s starting to approach race?

Absolutely. Immediately when I read the line. I do think she’s trying to get across that she was a prisoner to the Waterfords, but subtext and what it means culturally, what that reference—“I was property”—what that means to viewers and what that means to the rest of the world, I do think it’s slowly approaching the idea of race.

I got really emotional in the scene where she’s sitting by herself eating sushi. It was a small but beautiful moment. What discussions did you all have about what you wanted to accomplish in that scene?

That scene was the most complex to shoot. It’s crazy, there’s this eight-minute scene with Serena Joy to tell her she’s pregnant and we’re reuniting, and we shot that in like an hour. But the sushi and Coke scene, I’m telling you. We wanted it not to be too saccharine and just be a small glimpse into her life, making it seem as natural as possible, but without being too natural, because the camera needed to be in so many places. I picked up that can of Coke so many times. It was very technical. After we shot it, I was like, oh god, they’re going to cut that scene, and I loved it so much. I loved the quietness of it. I loved the fact that she still says grace before she has a meal. When we meet her at the beginning of season 1, she’s so hardened. To go from that, and she still has a childlike warmth to her in [this] scene, it was my favorite part. I’m glad it made it. 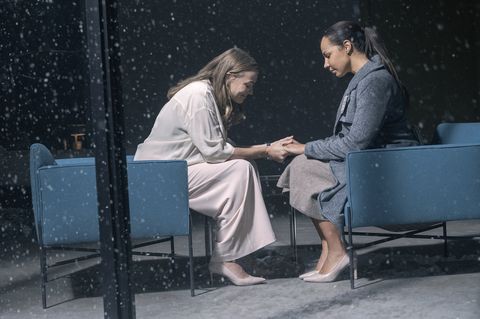 There’s also a powerful moment in episode 2 when Rita is speaking at the fundraiser in Canada. Even though she’s being genuine, she’s having to perform her trauma in order to raise awareness in Canada. Did you feel parallels between that scene and what happens in our world when we try to bring awareness to crises?

All the time. The director Colin Watkinson wanted it to feel like that. In doing it, it felt uncomfortable because I saw myself. As an actor, sometimes you’re asked to speak at events and create awareness, and I saw how it seemed like monetizing trauma and how icky that can feel and seem and sound. But unfortunately, people respond to that. It’s why people love watching the show. People respond to watching heightened trauma. I think the character realized it was a means to an end.

Do you think we’ll ever learn more about Rita’s backstory?

I don’t know. At this point I’ve made up the most ridiculous backstory. Once I had that she was a lawyer on Wall Street. I’ve made up so many things. She’s almost a chameleon because she’s able to be very kind and heartwarming and then also very cutting. I do think she was involved in something where she was like a defense lawyer, where she’s able to play both sides of the fence and change her personality. I have so many questions and want them answered. I know there’s a lot of people that really like her. I love that it took a while for people to get to like her. Those are my favorite kinds of people, when you don’t really trust the person. She had to grow on some people. I think now she’s earned it.

We find out that Rita’s family can’t be located yet. How do you see her finding her way in this new world where she doesn’t have those connections?

I’m hoping truly that Serena Joy’s son gets taken away from her, and then I get it. Because Serena Joy and everything they did with Gilead took my son away—we find that out in season 2. So, an eye for an eye. I’m not going to take her son, but I won’t say no if I have a baby to raise, because again, that would give Rita purpose. It would give her a child back that was taken from her. Also, I would totally take the baby to go and visit its mom in jail. That’s really where I want to see her end up in season 5.

This interview has been edited and condensed for clarity.

WATCH THE HANDMAID’S TALE ON HULU

A Guide to the 11 Best At-Home Hair Cutting Scissors
So, You Want To Dress Like The Baby-Sitters Club
The 15 Best Candles on Amazon You Need Right Now
These 24 Celebrity-Approved Clean Beauty Products Are All 20% Off
Zendaya Reacts to Timothée Chalamet Teasing Her About Tom Holland