Spoilers for The Haunting of Bly Manor episode 5, “The Altar of the Dead” below.

To hear T’Nia Miller tell it, horror isn’t really her thing. She knows comedy, as evident from her performance as Maxine Tarrington, chair of the school board on Sex Education. And she’s more than comfortable with drama, as seen from her role as Celeste on Years and Years, which examines political upheaval through the eyes of one Manchester family. But horror? “It’s not necessarily a genre I am familiar with and play in,” the actress admits to ELLE.com during a call from her South London residence.

It’s ironic, then, that Miller found herself in The Haunting of Bly Manor—playing a ghost, no less. She hadn’t even watched The Haunting of Hill House, the previous installment of showrunner Mike Flanagan’s horrifying Netflix series, before her agent sent her the script. But when she tried the first episode, she was hooked. In fact, she stayed up late binge-watching it. “I was like, ‘Ooh, this is good,’” she recalls.

Like its predecessor, Bly Manor compels its actors to think beyond the concept of a haunted house and exposes some of our deepest fears, including abandonment and grief. As Hannah Grose, the manor’s housekeeper watching over two young orphans (Amelia Bea Smith and Benjamin Evan Ainsworth) while grappling with her own solemn reality, Miller channeled her past. Though it’s been years since Miller’s then-young son was sick and she was struggling to care for him as a single mother of two, the experience still weighs heavily on her mind.

“I wanted to fall apart,” she remembers. “When you see your child hurt and you can’t do anything to help them… I felt like I was going to have another breakdown, but I couldn’t. I had to keep it together.” The usually composed Mrs. Grose reaches that same boiling point in episode 5, as she calmly walks out of the manor before releasing a sorrowful wail. It’s the moment Miller becomes—much to, perhaps, her surprise—a scream queen.

But it should shock no one that Miller can transform into any role once she sets her mind to it. After all, she put herself through the prestigious Guilford School of Acting in the U.K. while raising two children under the age of five because she was determined to follow her acting dream. “I want it all!” she laughs. Taking a break from planning her relocation to Los Angeles—or perhaps Crystal Palace in London, as she hasn’t quite decided yet—Miller discusses love amid horror, “having the balls” to proudly rock a shaved head, and tapping into her vulnerabilities in The Haunting of Bly Manor.

What drew you to Hannah Grose?

I absolutely adored that twist.

What was your point of access to your character’s arc?

It was my own story, really. I’ve experienced grief in different ways. Hannah has the grief of losing her husband, [who] went off and had an affair. And she has these two children to look after. I raised two children by myself as a single parent. My son went through a stage where he was really bad, and thank god it was a phase and he got out of it, but he had really bad ailments. And I wanted to fall apart. When you see your child hurt and you can’t do anything to help them, it’s beyond your scope. It’s not that you can use a cloth and antiseptic and love them down and tuck them into bed.

And I went to drama school with two children under five. When they were well, a dear friend said to me, “You need to cry.” She is a beautiful spirit, and she told me to cry! And I cried. I let it out. So, I draw inspiration for Hannah from that experience in episode 5 when she walks down the path and she roars. That was my journey with my son, once she gave me permission.

What made you decide to act after having two children?

It was something I always wanted to do. My father’s a photographer, and on my third birthday he took this photograph of me. I remember that photograph because I got smacked on my bottom before it was taken for sucking my thumb. Someone asked me [that day], “What do you want to be when you grow up?” And I said I wanted to be an actor. So that was always something I wanted to do, even before children, before mortgages, dissolved marriages, all that kind of stuff. I’m not book smart. I had the passion and was like, “I’m going to do it.” My mother started off as a nurse, then became a psychotherapist. She elevated herself into her career with the great belief that you can do whatever you want to do. So I was like, “I’m going to make this work.”

Why else are we living if we’re not doing what makes us happy? I see this job as a lifestyle I have chosen for myself. Now my children are old. I had them very young. They’re grown. The last one just graduated with a [degree] in politics. They’re doing really well for themselves. I’m glad I stuck at it. It teaches them as well: If you want something, you go for it. The universe will meet you.

“Why else are we living if we’re not doing what makes us happy?”

I find it interesting that there is so much love and loss woven throughout this otherwise horrifying tale in Bly Manor. What was it like to examine that on the inside?

I’m like Hannah, soft and sweet. I’m like, “I love you,” and I’m going to tell you. I don’t care if we just met. I fall in love really easy. It doesn’t necessarily mean in a sensual way. But I think as an actor, you have to get to the intimacy really quickly. You might meet someone and in the next scene, you’re kissing them. There’s a shortcut to intimacy. In the show, there’s a lot of love and a lot of loss, and [it’s] really [about] how those two are pulled together, and sometimes they’re in conflict with each other. Even with Dani and Jamie [Victoria Pedretti and Amelia Eve, eventual lovers who play the manor’s au pair and gardener], there’s always something in the way. And it’s only ourselves that get in the way, right? Or death, in my case.

Hannah’s death is so brutal to watch.

So brutal! And that’s the denial part—Miles [Ainsworth], this kid. Anything with children is really scary. Most people love kids and they’re really cute. But when they’re evil… Miles is evil. He did an amazing job. Both are the most caring, beautiful, well-mannered, funny and confident children I’ve ever had the pleasure of working with. And they’re just adorable.

They are certainly mesmerizing on screen. The series has a brilliant way of turning home, typically a place where people feel the safest and most centered, into an epicenter of horror. How were you able to help reimagine that space and excavate the innermost fears of the self?

Actually, I have kind of an interesting story. On the first day of shooting episode one, when Dani comes to the manor and we sit down and have dinner, the light blew.

And every time someone would change the light, [it] just kept blowing. I shit you not. I was like, “Oh damn. What have I got myself into?” That’s the thing: If you watch a scary movie, you feel like something’s over your shoulder, even in your own house. There have been times when I felt like, Oh, what is that? It doesn’t feel right. It just doesn’t feel safe. I think that speaks more to the fears within ourselves than the building or Bly. I do think energies are left behind and that’s what Mike tapped into. 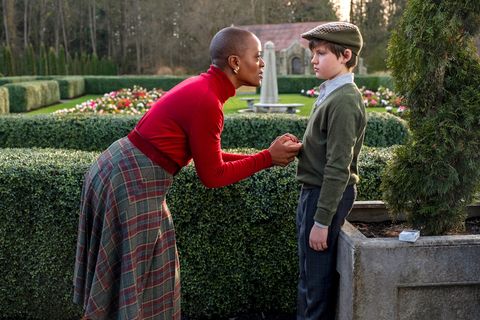 You previously starred on Years and Years, which is a horror of another kind because it reflects our real-life dystopia. Do you feel a greater responsibility now to interrogate or look at our reality through your work?

Absolutely. I think if we look at story in its truest form, it was to educate. It was to bring villages together. It’s been used as a political tool to really look at what’s going on in society [and] with the people in charge. I think it’s really important for all of us to band together—not just actors and musicians, producers, casting directors, and journalists [like] yourself. We all really have to keep questioning each other and have honest dialogue.

During this time of Black Lives Matter, it’s horrifying. It makes you angry. But the beautiful thing is that people are coming together. They are having the conversation. Because it’s been happening. It’s not a new thing. My son was stopped and searched when he was 11 years old. An 11-year-old kid! What are you stopping and searching him for? It’s just the reality. We have a huge responsibility to interrogate the truth and reflect it back, and to keep asking questions and listening with an open heart.

I agree. Where do you get your sense of self from—one that gave you the confidence to declare a career at age three, rock a shaved head like a badass, and channel your own vulnerability for all to see on screen?

When I was 13, I was like the tallest person in my class [at 5’6”], so I always stuck out from the rest of the kids. People expected more from me because they thought I was older, and I was always called weird. I made a decision around 15 that I’m just going to roll with that. I’ll be the weird one. It’s fine. I’m terrible at jokes. People laugh at me and that’s cool. But when I make a joke, no one laughs. It’s like tumbleweed.

So, all of these things are character-building, confidence-building. With the hair…I don’t know if you’ve watched Chris Rock’s Good Hair, but I had what they would call “good hair.” I relaxed it. It was straight, long. And I got to 20-something and was like, What am I perpetuating here? This idea that with length, I look more European. I’m not decent as a Black woman. So, I shaved it off with the intention of growing back an afro. I sat in that barber’s chair, saw my skull, and I was like, “Wow, there’s nothing to hide behind.” I can’t hide behind all these different hairstyles. I was worried that I wouldn’t get any work as an actor, but actually it paid off: Loving my skull and not hiding behind beauty and makeup and hair gave me a confidence to play these characters.

Watch The Haunting of Bly Manor

Iconic Teenage Characters Who Were Played by Much Older Actors
How We Can Start Fixing Our Brains After Living Through the Trauma of COVID-19
See Jennifer Lopez Positively Glow Alongside Daughter Emme and Mother Guadalupe
The Real ‘Gurus’ Behind Instagram’s Popular Affirmation Accounts
Ageism Hurts All of Us, Even ’Young People’