Katee Sackhoff has been part of the Star Wars universe since 2017, but this year marks the first time she really got her hands dirty as Bo-Katan Kryze. Physically, that is.

The Clone Wars and Star Wars Rebels character is no stranger to a bit of rough and tumble—she’s a former member of the formidable Death Watch, a terrorist group hell-bent on making their native home of Mandalore a warrior nation once more. But up until The Mandalorian season 2, Sackhoff only ever voiced the fan-favorite character. For the live-action Disney+ series, the actress needed to bring a completely different kind of performance. “I played the voice of her for so long I can picture her in my head,” Sackhoff tells ELLE.com. “I dream as her but I’ve never actually moved as her, and that was something that took a lot of work.”

Bo-Katan makes a striking debut in episode 3, “The Heiress,” alongside Mandalorian cohorts Axe Woves (Simon Kassianides) and Koska Reeves, played by Mercedes Varnado, aka WWE’s Sasha Banks. These Mandalorian not only inform the series’ eponymous hero of the diversity of his adopted people’s beliefs and traditions, but they save Baby Yoda (several times) and provide a significant narrative undercurrent to the series: the pursuit of a deadly weapon called the Dark Saber, which Bo-Katan believes can help restore their nation’s planet and power. In the season 2 finale, Mando wins the Dark Saber in combat, which means the only way for Bo-Katan to claim it, according to Mandalorian tradition, is by defeating him in combat too.

There are two sides to her warrior leader, Sackhoff says: one regal, thanks to her dynastic upbringing; the other a fighter whose weapons and blasters are almost an extension of her body. “That was something I wanted to pull from the animation and that was definitely not the easiest thing to do,” Sackhoff says. “I also have an amazing stunt double, Caitlin [Hutson]. She makes me look good with that jet pack, and that I cannot lay claim to.”

That’s not to say Sackhoff didn’t do as many of her own stunts as possible. The 40-year-old is a natural athlete who once planned a career in swimming until a knee injury prevented that path. But her competitive drive has never gone away, and while filming with Varnado, she wanted to hold her own in front of the professional wrestler. 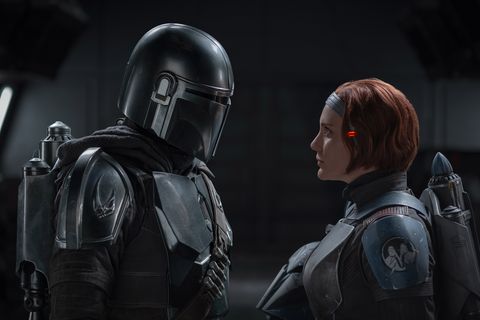 It’s a testament to Jon Favreau’s casting that he brought in two women with recognizable fight training to play such warriors alongside established badasses Gina Carano (Cara Dune) and Ming-Na Wen (Fennec Shand). And though Varnardo’s primary job is knocking people out, she was more than impressed with the strength her co-star brought to the role. “Katee’s an athlete herself,” Varnado tells Elle.com. “Every single week I was looking at her body and I was like, ‘Man, I’m supposed to be a professional wrestler on TV, but you’re showing up with an eight-pack. I got to catch up!’”

The Mandalorian is the 28-year-old’s first acting role, though she’s been throwing down in WWE rings since 2012. As the reigning SmackDown Women’s Champion, she wanted to incorporate elements of her wrestling style into the fight choreography of her Mandalorian character. “I wanted to bring a lot of Sasha Banks into this realm because I wanted my fans to instantly know who I was,” Varnardo says.

Sackhoff also arrived with her own toolkit of training—the actor has a history of playing “characters who are very much warriors,” with a resume including Battlestar Galactica’s Lieutenant Kara “Starbuck” Thrace, Longmire’s Deputy Vic Moretti, and Riddick’s Dahl. But when it comes to Bo-Katan, Sackhoff has an intimate understanding of the character and provided input into how the warrior might act or respond in any given situation on set.

“It did really feel like a collaboration,” she explains of working with Mandalorian series creator Jon Favreau. “It really felt great to have somebody ask what I thought. Jon and I would have conversations about the things she knew and the things we thought she didn’t know. When I walked [on set], it immediately felt like I belonged.”

Varnardo was shooting The Mandalorian concurrently with her WWE commitments, an overwhelming task for the novice actor. “Not only did I want to understand what I was doing for Monday Night Raw and where my character was going as a wrestler, but I wanted to watch The Mandalorian so I understood what was going on,” she says. “I wanted to gain so much knowledge because it was still brand new [to me].” She’d fly east coast to west, journeys that could take six hours, to film her scenes. But first, she needed to be stripped of her “larger-than-life” Sasha Banks aesthetic, because apparently, there’s “no glitter” in the galaxy far far away. The wrestler did feel like “a kid walking into a candy store” because of the expansive literature, films, and TV shows that could provide context for her performance, but it was still a lot to take in for a newbie: “I felt like I had to learn things fast for this episode, I was like, ‘Oh my god, what do I need to know?’ And they were like, ‘Breathe, relax, you’re fine.’”

Executive producer Dave Filoni proved to be a calming influence for Varnado’s first day on set, explaining to her that there was still fluidity in where her character’s story would go. “He said, ‘What you need to be is Koska Reeves, part of the Mandalorians trying to find Mando, who has the information to help us find Moff Gideon and find the Dark Saber,’” Varnardo recalls.

Still, the actor wasn’t alone in worrying about whether she knew enough about Star Wars to do the role justice. Sackhoff is an expert in intense sci-fi fandoms and admits she’s scared she might get something wrong about Bo-Katan or the established canon. “I’ve been slowly learning that Star Wars fans are incredibly loyal and passionate about this,” she says. “[If] I accidentally say something wrong from her backstory, that would not go over very well, so I’m constantly brushing up on my Star Wars history. My biggest fear is I’m going to disappoint them.”

Varnardo’s just excited to add a new string to her bow, bring Sasha Banks fans into the Star Wars fold, and see how far her Mandalorian journey will take her. “It’s so incredibly cool to see how excited my WWE fans are but gain new Star Wars fans too,” she says. “I can only hope people are inspired by my story. I can only hope to discover the character of Kosta Reeves even more.”

Watch The Mandalorian on Disney+

<i>Project Runway</i> Season 19, Episode 1 Recap: Rainbow Connection
Foundrae Hosts an Intimate Dinner To Celebrate Its Holiday Collection
Genetic Testing Saves Lives. So Why Aren’t More Women of Color Doing It?
Dakota Johnson Looked Breathtaking in a Nude Bejeweled Gucci Dress in London
<i>You</i> Is Getting a Season 4 on Netflix—Here’s What We Know