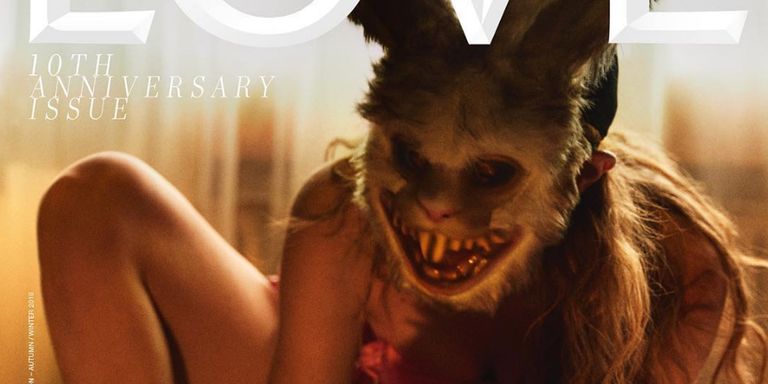 For its 10th anniversary issue, Love magazine decided to change it up. Instead of having Gigi Hadid’s beautiful face on their cover like everyone else, the team decided to have her pose in a terrifying evil bunny mask instead (with a cute puppy to even out the horror). So here she is, giving Donnie Darko vibes with great hair, in her most nightmare-inducing magazine cover yet.

Hadid has done a ton of magazine covers and editorials at this point in her career, but this will likely be the only one where she’s styled like this. At least the dog looks unbothered.

She has a second Love magazine cover, by the way, where she looks perfectly pretty and normal. It’s a nice palette cleanser after the bunny one:

Find Out What Movie Everyone Was Obsessed With the Year You Were Born
All the Answers to TikTok’s Esthetician Versus Dermatologist Debate
How Old Is The Cast of Netflix’s <i>Outer Banks</i> Now?
Prince Harry and Meghan Markle Release a Statement Condemning ‘Inequity and Racial Bigotry’ in Media
Kourtney Kardashian and Travis Barker Were Photographed Making Out in Santa Barbara