Tom Holland isn’t hiding his romance with actress Nadia Parkes anymore. The Spider-Man actor shared a photo of Parkes on his Instagram for all to see. He didn’t tag her, but in photos shared on her Instagram at the same time (and presumably taken by Holland), she’s wearing the same outfit. The Instagram gesture comes roughly two months after the Daily Mail first reported the two had been secretly dating for months and were quarantining together.

Parkes’ shot, by the way, got a comment from her friend Sophie Turner, hours after reports came out that Turner welcomed her first child with husband Joe Jonas, a baby girl named Willa, this past Wednesday. (Turner’s rep confirmed the baby’s arrival, saying the couple is “delighted” to share the news.) Turner’s clearly been on the ‘gram today, supporting her friend. 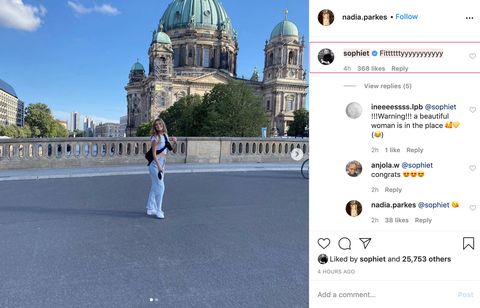 The Daily Mail reported back in late May that it was believed Turner and Jonas introduced Holland and Parkes to each other.

A source told the outlet then that Parkes was staying with Holland, his brother, and a friend at their London flat. “It was early days for Tom and Nadia when the lockdown was announced in London,” the source explained. “They made the decision to isolate together, and things have been going great between them. Tom has told friends and family they’re in an official relationship and living together so soon into their romance has only made them stronger.”

In the past, Holland has kept his relationships private. He told ELLE in July 2019 that he was single then but is “definitely a relationship person. I’m not the fleeting type at all; it’s not my way of life.” Holland has previously been linked to Zendaya and childhood friend Olivia Bolton. Zendaya and Holland, Spider-Man co-stars, maintained they were only friends despite reports otherwise.

Ageism Hurts All of Us, Even ’Young People’
Ok Taecyeon Is Good at Being Bad
All About Aubrey Plaza’s Husband, Jeff Baena
Meghan Markle and Prince Harry Shared an Adorable New Photo of Archie for His 2nd Birthday
See Jennifer Lopez Positively Glow Alongside Daughter Emme and Mother Guadalupe