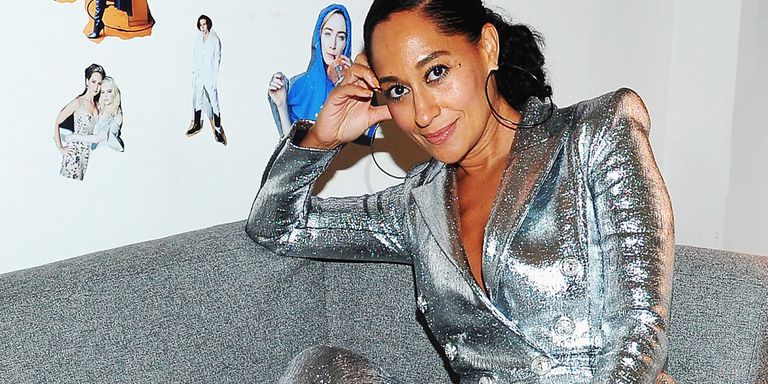 By the end of our interview with Black-ish star Tracee Ellis Ross, she knows how she wants it to start. “Tequila, a man, and my glasses,” she says. “I would like that to be the headline, please.” Those are Ross’s three survival necessities if she ever had to stop traveling (and live on a desert island)—which, by the way, she never plans to do. Travel is integral to Ross and has been for her entire life, which is why a partnership the new United Explorer Card—which helps jetsetters bank miles in a handful of new ways like two times the points on hotels and restaurants—felt about as natural as these sorts of things can feel. “I am a big traveler. I have been traveling since I was a kid. I like that the United Explorer Card empowers people to get out there and travel the world and effortlessly be rewarded for it. I also love racking up miles and ending up with free trips so that I can get out there and enjoy,” she told us.

We caught up with the actress, director, and newly minted video vixen on the phone in June to talk Rihanna, a novel twist on an airplane drinking game, and everything that’s good in the world of TER.

What made you want to partner with Chase and United on the Explorer card?

I am a big traveler. I have been traveling since I was a kid and I loved the idea of this partnership for numerous reasons. I felt like it empowered people to get out there and travel the world and effortlessly be rewarded for it. I also love racking up miles and ending up with free trips so that I can get out there and enjoy. With the United Explorer Credit Card, you’re rewarded not only for your flights but also for your restaurants, hotels, and, shopping trips.

What has travel meant to you in your life?

Traveling while I was growing up really made me feel like a child of the world and expanded my understanding of the human experience. It opened up my eyes to how similar we all are as humans. The actual specific experience of traveling has allowed me an opportunity to find what makes me feel comfortable in my skin. I travel on my own often so I have learned to be my own partner and my own best friend.

Any travel plans for the summer?

I’m headed off to France. I’m visiting Paris first, which is where I grew up. Then I’m going to the South of France for a week for some quiet time in the countryside.

What products do you never forget to travel with?

Do you have a travel drinking strategy? Wine on the plane? Beer in the terminal?

There is no alcohol during travel. As much as you think it will be lovely, it ruins everything. I get puffy, I get dehydrated, and it’s so not worth it. I actually play a game with myself when I fly to see how much water I can drink. If I’m not going to the bathroom a lot on the airplane, I know that I have not been having enough water.

Where do you think Rainbow from Blackish would travel to for a dream vacation? What about Joan Carol Clayton from Girlfriends?

I think they might travel to the same place, Paris, and perhaps that means I’m influencing both of them. I think Joan Clayton would go to Paris because she’s such a romantic and she would think that she’s going to run into her husband roaming the streets.

Let’s take Bow for her dream vacation to Japan. She would want to explore new cultures and check things out that have nothing to do with her world.

Congratulations on another season of Black-ish, what can we expect next season?

I made my Black-ish directing debut with the “divorce episode,” so I do hope to direct another episode next season. We are actually working and trying to figure out when and how we can squeeze it in the schedule. The writers room just got started and just started working, so they’ll probably lean into their adventure. I’ve had some ideas and some suggestions but we’ll see.

You also just starred in Drake’s “Nice for What” video. Can we expect more music video cameos from you?

How would you direct the video?

I want to do a Rihanna video but only if it’s just me and Rihanna in the video. I don’t want to be background for Rihanna, I want to be a leading role, a leading role opposite Rihanna. There should be two of us, bad ass ladies that are running the world and maybe end up as lovers in the end.

If you were stranded on a desert island, what three things would you bring with you? Rihanna?

A very tall, bearded and tatted up lover. Let’s say an artisanal king. Number two would be my glasses because I wear contacts so I would need glasses to be happy on my island with my artisanal king. The food would be handled because there’s coconuts, papayas, and fish. We know he [artisanal king] knows how to cook fish. I would have to bring tequila because I don’t know how to make tequila. Tequila, a man, and my glasses. I would like that to be the headline, please.