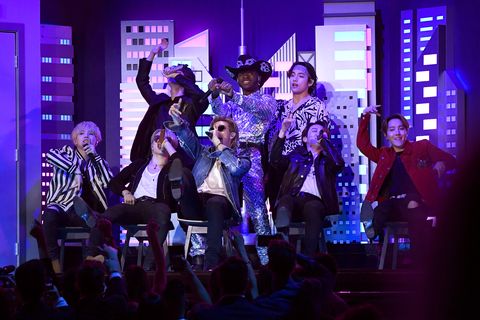 BTS made history performing at the Grammys for the first time tonight, and they joined one of the evening’s most star-studded numbers. The k-pop band was part of Lil Nas X and Billy Ray Cyrus’ “Old Town Road All Stars” performance, a nod to RM and Lil Nas X’s “Seoul Town Road” collaboration, which was released last year.

This is a big night for Lil Nas X, who has six nominations, including three for “Old Town Road”: Record of the Year, Best Pop Duo/Group Performance, and Best Music Video. He is additionally nominated for Best New Artist, Album of the Year (7), and Best Rap/Sung Performance (“Panini”). BTS has no nominations this year.

Ariana Grande first teased BTS’s Grammys performance when she shared a photo with them earlier this week. “look who i bumped into at rehearsal :)” she captioned it. Grande is also a performer tonight.

The Grammys aren’t the only venue where BTS will perform in the U.S. The boys will do their very first live performance of their new single “Black Swan” on The Late Late Show With James Corden on January 28. BTS will release their next album, Map of the Soul: 7 on February 21.

Kim Kardashian Says North West Still Wants to Be an Only Child Five Years Into Having Siblings
With COS, Activist Janaya Future Khan Sees Fashion’s Hopeful Future
Meghan Markle’s Favorite Skincare Brand Tatcha Is Having A Sale
7 Ways to Avoid Awkward Grown-Out Bangs
Keke Palmer Opens Up About Falling in Love With Her Hair Again