Meeting the parents is never easy—particularly if one of them is the Queen of England. The first full-length trailer for The Crown season 4 depicts Princess Diana (Emma Corrin) interacting with Queen Elizabeth (Olivia Colman) and the tension brewing in their relationship. It also offers a deeper look at Gillian Anderson as Margaret Thatcher, another woman the monarch spars with in season 4.

“One day, dear boy, you shall be king. Your duty now is the choice of a woman the people will love as a princess and, in due course, as queen,” Prince Charles (Josh O’Connor) is told. Enter Diana, a young woman who is basically hand-selected as Charles’s bride. But things between the royal family and Lady Di sour when she captures the spotlight. “All I want is to be loved, it’s all any of us want from you,” Diana tearfully tells her mother-in-law. Of Diana’s assimilation into the Firm, Corrin previously told Town & Country, “The coldness, the traditions, and the expectations of behavior…I don’t think she expected that,” adding, “I think she expected to join a family.”

One woman not seeking the queen’s approval is Prime Minister Margaret Thatcher. Born only six months apart, the two women appear to rule with similar life experiences. But their headstrong natures could clash during a turbulent political climate. “Two women running the show, that’s the last thing this country needs,” Prince Philip (Tobias Menzies) observes. “Perhaps that’s precisely what this country needs,” the Queen responds. As Thatcher tells the monarch, she has no problem leaving a trail of enemies on her journey as leader.

Creator Peter Morgan previously spoke to Vanity Fair about the layered dynamic between the Queen and Prime Minister. “When I found out that they were born only six months apart, that was a really big breakthrough for me,” he said, adding, “They’re like twins who are not the same.” Among their shared traits, Morgan said, “They’re both very resilient, very committed, work incredibly hard, have an extraordinary sense of duty. They’re both really committed to the country…But then they had such different ideas about running the country.” 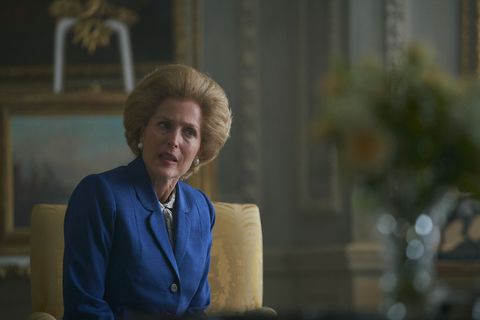 At one point in the new trailer, the Queen Mother observes of Diana, “In time, she will give up her fight and bend, as they all do.” The queen asks, “And if she doesn’t bend, what then?.” Princess Margaret (Helena Bonham Carter) replies, “She will break.”

The Crown season 4 will hit Netflix on November 15.