This week, TMZ reported that Miley Cyrus and Australian musician Cody Simpson have split after less than a year together. Per E! News, the two had different goals and decided to go their separate ways.

“Cody felt like he was in a different place and wanted to be single. Miley started to get busy working on new music and their relationship fizzled out,” a source told E!. “Nothing bad happened, and they still respect each other. Miley has expressed she wants to be single for awhile. Cody has taken more interest in partying and being around a lot of friends and Miley’s not into that right now.”

The source continued: “She’s always been a free spirit so it’s better for her to fly solo right now,” our source added. “Not many people knew Miley and Cody officially split because they are still good friends. They have remained in touch but felt their relationship came to an end.”

On her Instagram Live on Wednesday night, Cyrus addressed the reports of her breakup, saying: “It came out that me and my boyfriend have broken up. It was confirmed by a ‘reliable source’ even though no one is reliable in a relationship except the individuals who are participating in it. But right now, two halves can’t make a whole, and we’re individually just working on ourselves to become the people that we wanna be, like everybody else at this age.”

The two have been dating since last fall, and Simpson even released a song about Cyrus. They appeared to be spending much of the quarantine together, and earlier this month, Simpson posted a photo of the two on his Instagram story. “In love with my best friend,” the caption on the photo read. 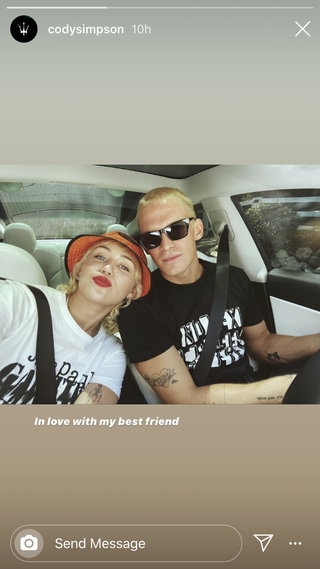 “Don’t make it some drama story if next week we’re out hanging out or getting pizza,” Miley continued on Instagram Live. “We’ve been friends for 10 years and we’re gonna continue to be friends.”