Stranger Things had one Emmy nomination tonight—Outstanding Drama Series—but that wasn’t enough to bring the cast out virtually for the ceremony. The teen stars of the show, Millie Bobby Brown, Finn Wolfhard, Noah Schnapp, Gaten Matarazzo, Caleb McLaughlin, and Sadie Sink, didn’t appear during the virtual red carpet segment, nor did the show’s young adult actors Natalia Dyer, Joe Keery, and Charlie Heaton or its main adult actors Winona Ryder and David Harbour. When the nominees were announced for the category, just the show’s creators, the Duffer Brothers, appeared on camera. 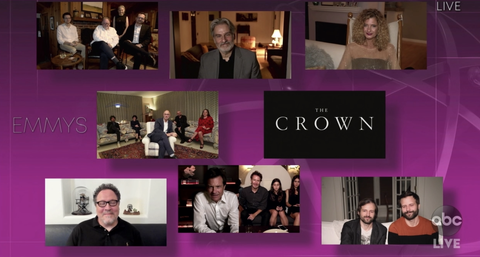 The Duffer Brothers in the bottom right corner.

It’s understandable: Because there’s no in-person ceremony, and Stranger Things isn’t favored to win its category (it’s up against Succession, Ozark, The Crown, Better Call Saul, The Mandalorian, The Handmaid’s Tale, and Killing Eve), the full cast chose not to go all-out from home. Stranger Things didn’t win, in fact: Succession did. 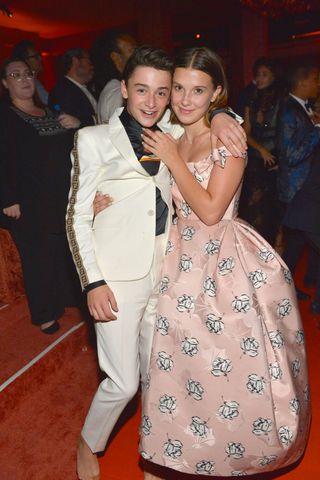 Noah Schnapp and Millie Bobby Brown at Netflix’s Emmys after party in 2018.

Brown spoke to ELLE last October about her hopes for her character Eleven in season 4 of the show. (Production was halted due to the coronavirus pandemic but is reportedly set to resume soon.)

“I hope she finds who she is, without a boy, a male influence in her life,” Brown said. “There’s Mike and Papa and Hopper and all the boys really. Even without Max⁠, she needs to find herself by herself. Everyone needs that moment in life to sit there and think, “Who am I as a person, who am I without everyone around me? How can I really love myself?” I don’t know if she knows how to do that yet. So I would like an arc for Eleven to learn how to love herself and learn who she is, which is hard in the circumstances she’s in. I think that she needs a little self journey. “

She recently spoke to W about her time in quarantine—and how she is ready to return to set. When asked if she enjoys not working, she responded, “No. Not working freaks me out. At first I slept in, ate whenever and whatever. I got my dog, Winnie the Pooh, in March, and we would cuddle. But by month three I was dying to dress up like a character and go play someone else.”