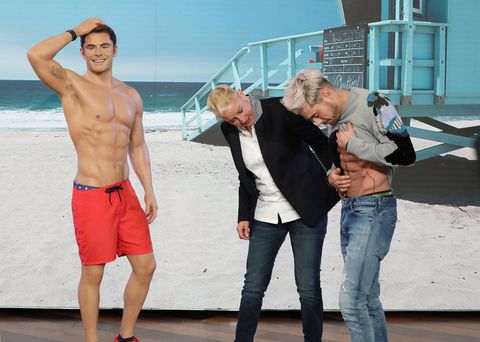 Please enjoy what may be two of the best minutes of your day: Watching Zac Efron react to his new Madame Tussauds wax figure, with abs so big they scared Efron himself and led him to give a PSA about body image. Ellen DeGeneres had the star on her show, where she introduced him to the wax figure made off of his image from the Baywatch films. Efron’s first reaction to seeing it was a loud “holy sh*t!” And then: “Whoever did this, I’m very impressed and scared.”

He and DeGeneres studied the figure’s abs, where he concluded that they’re kind of too big. Efron lifted his shirt to compare his chiseled chest and arms with the figure’s. And that’s when he gave a honest and heartfelt message to men about body image.

“They did a good job,” he said of Madame Tussauds’s replica. But then he added, “It’s a little bigger than me. That’s too big and don’t try—and for guys, that’s unrealistic, I’m telling you. Like, I got very big and buff for that movie but yeah, I don’t want people to think that’s the best way to be. Like, be your size. It’s not—like, I don’t want to glamorize this.”

And Efron’s Baywatch diet wasn’t glamorous, by the way. During shooting, he detailed how restrictive his diet was on Twitter, writing, “9 days of absolutely zero carbs & sugar. Only organic grass fed/free range protein and organic leafy greens. This lead to #Cheatday ! Devoured a steak, 4 side potatoes/veggies, macncheese, 3 desserts, bread/butter, brick o cheese & caviar.”