Zendaya is InStyle’s November cover girl, and the magazine’s editor-in-chief Laura Brown was able to get the private actress to talk a little about her seemingly back-on British boyfriend Tom Holland. Holland and Zendaya were first seen kissing in July; they were first said by People sources to be dating in 2017, but denied the reports then.

When asked about the viral meme photo of her and Holland, sitting in a store with him in costume and her looking annoyed, she remembered the day that was taken—and how the paparazzi affected it: “We were shooting in New York, and you can’t block off streets because it’s public space,” she said. “It’s difficult for Tom, who has to be in the full Spidey suit; it’s not like he can be incognito. He has to take his spider eyes out just to drink water. I don’t remember if he’s drinking water in that picture, but I think his eyes are popped out.”

“The paparazzi can be wherever they want,” she continued. “Even our holding area was a vitamin store with glass everywhere, so it wasn’t super private. I’m assuming someone was looking through the window, trying to scare us or something. So that was my face.” 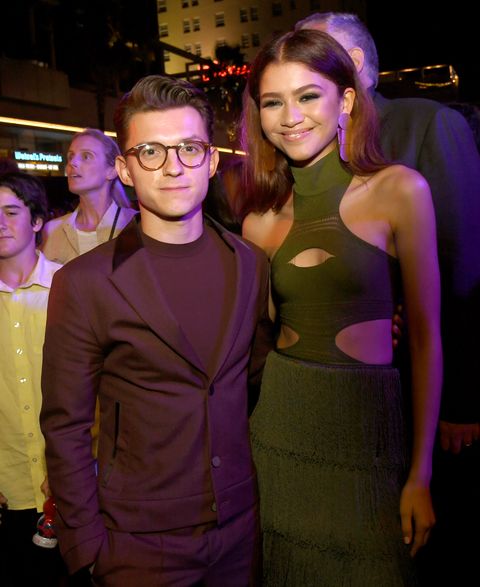 Brown asked Zendaya about what she appreciates about Holland as a person and actor.

“There are many things, obviously, that I appreciate,” she responded. “In an actor way, I appreciate that he really loves being Spider-Man. It’s a lot of pressure—you take on the role of a superhero wherever you go. To the little kid who walks by, you are Spider-Man. I think he handled that so well. And seeing him at work, even though he’s not a Virgo, he is a perfectionist,” she said with a laugh.

Zendaya spoke earlier in her discussion with Brown about her own perfectionist tendencies, attributing it to her Virgo star sign. “Messing up. Making mistakes [makes me nervous],” she said. “Not being the best I can possibly be at something. Failure. Again, that’s a Virgo thing. If something is not perfect or the best, then I feel like I might as well have not even done it. I turn something into being the worst thing, even if it was fine. But it’s not fine to me.”

On the subject of Holland’s perfectionist tendencies, Zendaya said, “Our director allowed me to come in every day [of the shoot], and it was cool to see how he cares so much about his work and making it right. I watched him do a fight scene all day, which is exhausting. He’d do a move, come back to the monitors, watch it, and say, ‘I can do that better.’ I’d be like, ‘Dude, you got it.’ But he wants us to be perfect, and I really appreciate that.”

Generally, Holland is easy company, Zendaya confirmed: “Yeah, he’s a fun time. Very charismatic, can make anybody feel comfortable and have a good laugh and a good chat. A good chat—I sound so British.”

ELLE Escapes: Art Basel
Paris Hilton Congratulated Lindsay Lohan On Her Engagement Despite ‘Past Differences’
<i>The Sex Lives of College Girls</i> Is Getting a Season 2
Amazon’s Latest 30-Hour Drop Is Meant to Wardrobe Empire-Building
Is This Audi Concept Car the Future of Driving?