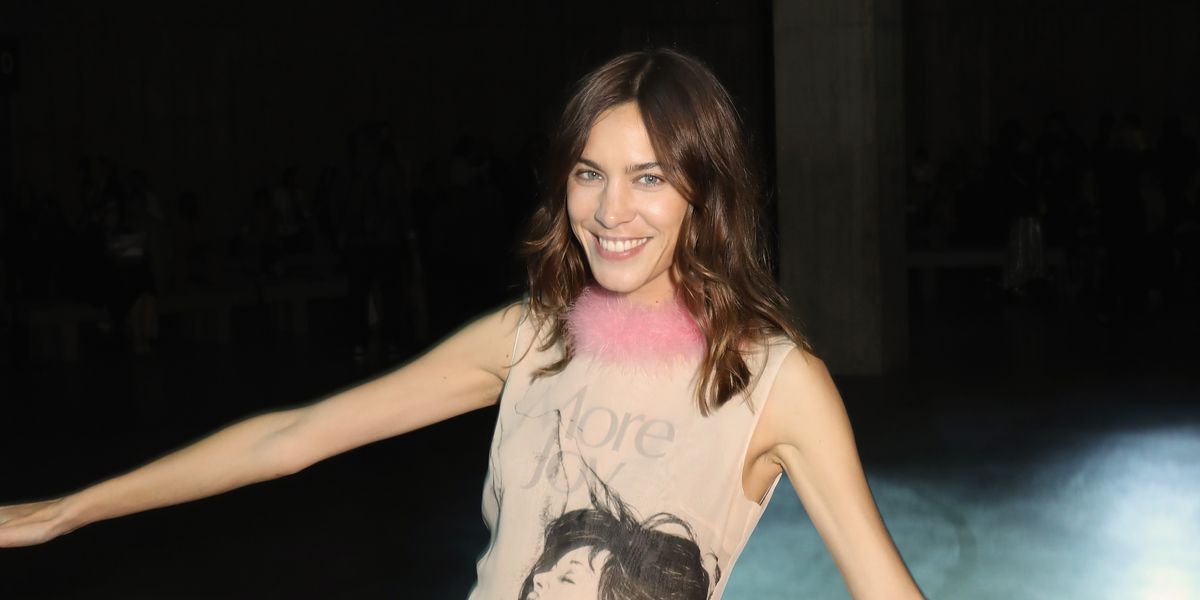 Alexa Chung is a basket case, a man eater, and an insecure shell of her former self. Just ask Google News, which hoards crazy headlines about her with the fanatic, frenetic energy of Gretchen Weiner stashing secrets.

“It’s gotten to the point where I hear myself talk and know what the headline is going to be before it even runs,” she sighs. We’re perched in her studio—a rooftop loft in East London—as she recounts the latest rumor: Years of fame have finally taken their toll, and she’s had a full-on psychotic break. “I’ve talked to a therapist, which everyone in New York does, and nobody should be ashamed of,” she says. “But I mention it once, to one reporter, and suddenly it’s like I’m in Girl, Interrupted!” We laugh because it’s funny. We laugh because it sucks.

There’s no membership card for fame, but access is a lock you can pick. Chung’s an expert at giving just enough to her fans—first through MySpace, where she answered fashion questions during commercial breaks of her TV show, then through one of the first celebrity Instagram accounts, and now with a canny American Express Platinum partnership that helped put the 34-year-old on the official Fashion Month™ runway calendar. As part of the deal, Chung sold exclusive merch from her collection at the AmEx Platinum House—a roaming clubhouse for cool kids (and rich ones) that’s hosted Drake, Michael B. Jordan, and Justin Timberlake in the past year. Only available to cardmembers and invited guests (read: royal Amelia Windsor, rock star James Bay, and Bride-of-Dior Chiara Ferragni), the illustrated sweatshirts, bags, and scarves sold out in hours… then reappeared later on party kids and rock royals at Chung’s late night after-party. Also: all over Instagram.

But Chung knows she can get people to buy things—she’s been doing it since 6th grade. “Not to blow my own trumpet, but by the time I was eleven, the girls at school who were fifteen and sixteen were buying the coat I had,” she says. “Of course, they’d tease me first. It would be like a solid month of ‘Alexa, why do you have a record bag? Alexa, why did you cut all your hair off? Alexa, what are those funny loafers?’ And a month later, they’d all be wearing it, too. The worst was when a teacher copied me. She bought the fuzzy coat and big glasses I wore. I took a lot of shit for that,” she laughs. “But I was not the middle-aged woman buying stuff because of a 13-year-old! Why weren’t they taking the piss out of her?!” I ask if being mocked at school makes it easier to take the slings and arrows of the British press. “You have to understand my family,” she answers. “I have two older brothers who were really mean to me no matter what. So I was never scared to wear something crazy, because there was no further bullying that anyone could do. I already knew I was too skinny and had massive ears. So when I went to school and people were like, ‘You look like Olive Oil from the Popeye cartoons!’ I would just say, ‘Yeah, I know. Next?’”

Chung is great at “next,” and that’s part of why she’s famous. (“I’m not famous!” she retorts, but she totally is, so whatever.) Among the trends she’s helped fuel, or at least reboot from 1967: leopard print coats, black liquid cat eyes, flats on the red carpet, wide-leg denim, and swimwear-as-workwear, which she made (and wore, to the delight of endless Grazia magazine spreads…) last year before it landed on the runways for Prada this week. (“I was obsessed with swim club as a kid because I liked random silicone hats,” she notes. “The costume always came before the passion for me.”) She’s also managed to go from a teen fashion model to a TV host, a book author, a textile illustrator, and a makeup guru (thank you, Lancome, Eyeko, and black liquid cat eyes…), despite the pop culture penchant for keeping pretty girls in proper boxes. “People really don’t like it when well-known women do a lane switch, do they?” she asks. “It used to be even worse. When I said I was writing a book, people were like, ‘Oh really, Alexa?’ Really snide about it, to be honest. But it’s gotten better, just the idea on the whole that we can become our full selves, without as much judgement.”

On the carpet at this year’s Met Gala

Talk turns to Scarlett Johansson’s new album, which is actually great, and the way rock stars and fashion babes, Chung included, seem to go together. I ask if she’d ever pull a Jane Birkin—or a Scar Jo, I guess—and record her own album. “I guess you’d have to see me at karaoke to decide,” she laughs. “I mean, I would…? Whoops,” she laughs. “No. Not really.” She is also not launching a home line, though she admits her Instagram feed “has taken a sharp turn into interiors. I really hope all the teen girls on my feed like my new obsession with ceramics… in fact, I was looking at Instagram today—this is when I realized my life had gotten really lame… I was a bit sad, because I’d just gone onto this chick’s Instagram. She’s got this whole table laid out with all this matching cutlery and glassware, and it looks so beautiful. And I have four forks and maybe six mismatched cups, and that’s it. I think it’s from living in New York for too long. The reality is, you just don’t need a bread knife, do you? I mean, I know I’ve smashed the wardrobe part of my life. But I’ve forgotten to invest in earthenware. I’m a one mug, one plate kind of single gal.”

Because I am shameless and also a Fearless Fashion Writer™, I ask Alexa which rock stars might come to her party at the American Express Platinum House—and also, how to flirt with them. Here’s how it goes…

ALEXA: What do you mean, “how to flirt with them?” Can’t you just be yourself? Why would you want to hang out with any guy who doesn’t want you to just be the real you?

ME: “The real me” would run up to a rock star and immediately start analyzing his B-side lyrics… while wearing pink glitter on my face… and like, giggling the whole time.

ALEXA: Yeah, I see what you mean.

ME: I mean, you wouldn’t be like, “Oh my gosh, the opening line of this song you wrote is—”

ME: So I should just pretend I don’t know who they are when I meet them.

ALEXA: I never really thought about it, but yeah. 100% And I say this as someone who, the only time I ever went crazy and was a “fan” to someone, it was a disaster.

ALEXA: It was Bruce Willis and do not laugh; he’s so good! So, I was invited to a Moda Operandi dinner. I showed up and Bruce Willis was in the room. I noticed him in the background. I was like, “BRUCE ACTUAL WILLIS” is here. I was freaking out. And [my friends] made me go up to him and introduce myself. I was so embarrassed. I actually said, “I am such a fan; thank you so much for all of your work. Die Hard means a lot to me.”

ALEXA: Oh, I fully did. I made an idiot of myself blurting that out, and then when I found my seat at this dinner, he was across the table from me. After I’d fully freaked out over him! I had to fully look away for the entire dinner. I was so embarrassed. Learn from me. Do not do this.

Fast forward to midnight in London, where Chung’s fashion party at the American Express Platinum House is a sliding marble floor of whiskey, tequila, and prettiness. The dance floor is packed, and most of the kids jamming to throwback George Michael and No Doubt bops look like they could be (or already have been) Glossier models. Chung and her besties—model Daisy Lowe, DJs Pixie Geldof and Aimee Phillips, radio star Nick Grimshaw—blast songs from a platform, and despite the Chiara / Amelia / Albert Hammond Jr. contingent, there’s not a selfie setup in sight. “That’s the irony of being Internet Famous, isn’t it?” Chung says. “It’s pushed me into really clinging to real life. I love IG and social media. I get my news that way. But I’m also aware of the limitations. That’s a viable business approach, but for me, 100% of my life is spent in real time. And I think the trend on the horizon is a turn against digital. The kids are already clocking off of social media. You can see that they get the next wave—that IRL is better than URL.” She asks if I agree, but I’m not paying attention—I spy a rock star in the corner, and I have to go pretend I’ve never heard of him.