“That’s when I realized, I was holding on to a Roberto Cavalli outfit and throwing away my relationship,” Carrie Bradshaw mused on Sex and the City while fighting with Aidan. He needed closet space, she needed couture. We know the outcome of that doomed relationship, because the choice should never be made between men and fashion. But Cavalli outlived it all, even if there is a flimsy reboot in the making.

You know a Cavalli dress when you see one. With a penchant for outlandish prints and a predilection for hypersexual silhouettes, the brand is known for its cheeky mix of Barocco overindulgence coupled with the overindulgence of the 2000s. Celebrity and cultural allegiances were forged between the brand and style icon Jennifer Lopez, with Kim Kardashian more recently sourcing her vintage wardrobe from Cavalli’s rich archives.

But Roberto Cavalli does not exist in a vacuum. Founded in 1975, well before the height of the ’90s Italian runway invasion, Cavalli has since established itself as a brand with staying power. It was helmed by both Paul Surridge and Peter Dundas, respectively, in the past five years. When Fausto Puglisi was named its new creative director in September 2020, the hope was to rebuild the brand from the ground up. The brand is intrinsically tied to the extravagance of the post-millennial era, but Puglisi wants to bring its 2000s aesthetic into our 2021 world.

“Okay, let’s rewind. Let’s write a new book. This is a preface,” Puglisi told me over Zoom.

With animated gesticulations that lend themselves well to a virtual chat, Puglisi said he understands the gargantuan task at hand. He doesn’t aim to rewrite the brand’s history—”It’s important to respect the DNA of a brand”—but he wants to bring it out of its famed archives and support a modern approach to dressing. In his debut collection for the fall-winter 2021 season, dubbed “Season Zero,” he’s marrying the past with the present. We see obvious nods to Cavalli classics in animal prints and a standout, bias-cut dress inspired by one worn by Cindy Crawford. The gown Aaliyah wore to the 2000s MTV Music Awards is now strapless but features the same feathered slit. Denim, which Cavalli is known for, is reinterpreted in a sandblasted, wide-legged pant. A section of the collection is unisex, an important shift for Puglisi’s revisioning of the iconic label.

“It’s very democratic and demographic,” he says. “What I’m trying break the boundaries of age, skin, culture. They live together, a masculine suit with a ultra sexy frock. It’s important that really the Cavalli woman is all the woman. I mean, really, I can’t stand people saying it’s sexy or it’s not sexy, it’s conservative or not conservative.” 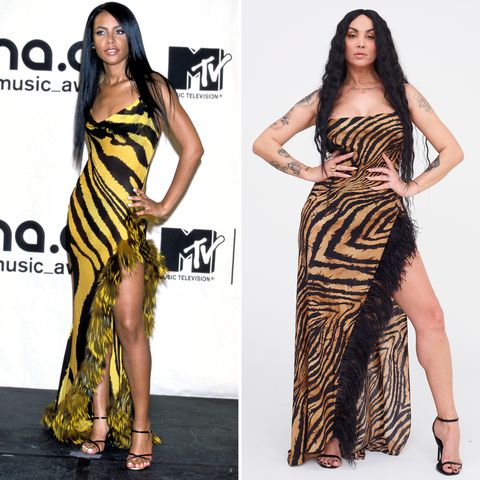 Read on to for Puglisi on his personal triumphs designing during the pandemic, the legacy he intends to uphold, and his thoughts on Generation Z.

We are talking about a brand which is famous for its strength, powerful, power, imagination and eccentricity. It’s connected to Diana Vreeland, to Tony Duquette. Cavalli is connected to the 2000s. It was Carrie from Sex in the City talking about Roberto Cavalli and it was J-Lo for Cavalli and Sharon Stone for Cavalli. It was the Golden Globes and the MTV awards and the party at Central Pad, the Cannes Festival.

It’s a challenge because this brand is still extremely alive in the mind of the people. In the past five years they didn’t really have the strategy, probably, that a brand like Cavalli deserved. So it’s a strong challenge but I’m putting all my energy and efforts to make this [shift] happen. I tried to design a collection that tried to talk to different kinds of women, so take off the flashy colors, work with different skin tones. I believe that I have a deep responsibility to be able to talk to different kind of customers, which is my goal.

On creating during a pandemic

The world that we are living in is constantly sucking your blood, your energy, and it’s asking you to give more and more and more. I’m a dreamer. There are so many people in the world that want just to travel, travel just to make selfies, and they don’t see anything where they are. I believe that there are people that can stay home reading a book trying to create their own fantasy. I’m like this. There was something selfish with my situation [during the pandemic]. It was a moment to challenge myself. It was about me as person, as human being, and I started to cook. I took my time not to design, not to create, but to listen to music, to read a lot, to watch the movies I like and to calm down a little bit. It was a moment to reflect.

Then I found Cavalli. Amazing people, a great team. Creating his collection was very energetic, because in Italy our people suffered. They’re still suffering. But there is hope. It’s beautiful.

On Gen Z’s relationship to style

There is this section [in my collection] which is genderless. What I believe about the younger generation is that they don’t like things that are too obvious. I can wear my boyfriend’s jacket, you can wear your girlfriend’s pants. We are living in a society that is very fluid now. There are not any kind of segments. Everything is very connected with the young generation most of all, who are extremely fluid, which is fantastic, because my generation was not like that. The young generation is proving that they’re able meet the super sexy with the coolest flat babouche to stay home or to go out.

On mindfully designing for 2021

I wanted to take the kind of flashiness off Cavalli because we’re in a pandemic. It’s a moment which is very sad for the world. I didn’t want anything that was too flashy, but I want it to be eccentric, which is different. I wanted different kinds of feminine attitudes because a woman today doesn’t need a designer to tell her to wear this design—a woman can mix and match herself.

On the future of fashion

I’m not a doctor, so this is depending on what our scientists are saying, but I believe that after the vaccine, I can’t wait to have you in Milan and I can’t wait to come to New York. I can’t wait to share with the people I love and respect, the journalists, the buyers, the clients. Fashion was born as a community. I only can pray and hope that everything will come like it used to be in terms of people together. People want to go out, about to share opinions, to share love, to shake hands again. We are all animals. We were born to be together. So absolutely, we’ll go out again.

This Halloween, the Easiest Costume Is a Tracksuit
Everything You’ve Been Stalking on Instagram Is On Sale at Shopbop
Foundrae Hosts an Intimate Dinner To Celebrate Its Holiday Collection
<i>Maid</i> Was an Opportunity Margaret Qualley Just Couldn’t Pass Up
Coach’s New Collab with Jennifer Lopez Is “Wearable, and a Little Bit Glamorous”